Andy Murray faces his first serious test at Wimbledon 2016 when he meets unpredictable Australian Nick Kyrgios in the last 16 on Monday.

The pair will meet on Centre Court at around 16:30 BST, with the match shown live on BBC One.

Following Novak Djokovic's shock exit, British number one Murray is the favourite to win his second SW19 title, while Kyrgios, 21, is looking to reach only his third Grand Slam quarter-final.

Former Wimbledon champion Pat Cash and ex-British number one John Lloyd analyse where this mouth-watering tie will be won and lost. 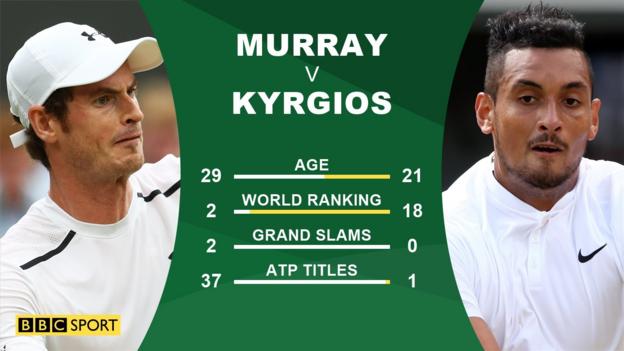 Murray must deal with the Kyrgios serve

Kyrgios' biggest weapon is no secret - it is his thumping serve.

The Australian has crashed down 79 aces so far in this year's tournament, a tally only bettered by American John Isner.

His serve speeds have regularly clocked over 130mph, while his first-serve percentage of 72% is only topped by five other men.

But, against Murray, he is facing one of the best returners in the game.

"If Nick hits a lot of aces then there is very little you can do about it," said BBC Radio 5 live analyst Cash.

"But he is also very big from the back of the court, his forehand is extremely strong and you need those sort of shots to get through Murray.

"He also has a great variety, that's what is unsettling to a lot of players. If he can play consistently well and keep up his focus he gives any player a real threat.

"We know Kyrgios has plenty of power, but Murray's defence is as good as anybody in the game.

"You do have to defend well against a guy like Kyrgios and Murray is moving really well. But he is also attacking, you can't just be defending all the time."

Kyrgios reckoned ahead of the tournament he was ready to "go deep" into the latter stages, reiterating after beating Feliciano Lopez - and following Novak Djokovic's exit - his belief he could become the first Australian man to win a Grand Slam since Lleyton Hewitt in 2002.

However, he has shown the two wildly different sides to his game over the past week.

On the resumption of his match against Lopez on Sunday, Kyrgios produced what Lloyd said the 21-year-old's camp would describe as "a 10 out of a 10 performance".

"If he plays like that, with concentration and focus, then Andy Murray is in for a tough match," added the 1977 Australian Open finalist.

"He showed controlled aggression, had excellent shot selection and played the percentages when he needed to."

But he showed his petulant side against second-round opponent Dustin Brown, losing focus in the third set as he continually vented his frustrations at his box, the umpire and the crowd.

As Kyrgios lost focus in the third set, his serve took a beating by Brown. He won only 53% of first-serve points and 45% of second-serve points.

"Kyrgios' big weakness is his mental capacity," said Cash. "His focus can come and go, he can lose his temper. He blows hot and cold.

"Often he goes into a phase where he is upset and can start spraying balls. Murray will look to exploit that simply by playing well and putting him into awkward positions."

Is Kyrgios' best chance of beating Murray on grass?

Murray has won all four of their previous top-level meetings, including a straight-sets win at the 2015 Australian Open and four-set thriller at the US Open later that same year.

Kyrgios does have experience of beating Murray, though, albeit in a Hopman Cup competition not officially recognised as an ATP rankings event.

This will be their first meeting on grass, a surface on which Kyrgios himself believes gives him the best opportunity of beating the Scot.

"In theory it would seem that grass would be his best chance of beating Murray," said Cash.

"With a serve like Nick's it is harder to return on the grass and so he will get a few extra points with that serve. The slower the court the more rallies he has to hit."

Survival of the fittest?

Murray has breezed through his opening three matches, spending little over five hours on court after seeing off Liam Broady, Yen-Hsun Lu and John Millman without dropping a set.

Kyrgios, however, has spent over two hours more on court than the Scot, having needed four sets to beat Radek Stepanek and Feliciano Lopez, as well as five sets to see off Dustin Brown.

"Murray will be trying to pin him to the baseline and wear him down over a few hours," said Cash. "That's what Andy does to players. He gets every ball back.

"Nick is still not as physically fit as Andy and he will suffer. That means he has to go for more shots. If they come off he can be unbeatable.

"If he has to work hard and struggle over five sets then he is likely to fade away against Andy. Andy is one of the fittest there is."

Kyrgios thrives on the big stage

Kyrgios has only played on Centre Court once before, when he caused a massive upset by beating Rafael Nadal.

Kyrgios, then a 19-year-old wildcard ranked 144th, became the first man outside the top 100 to beat a world number one at a Grand Slam since 1992.

"He is a showman who loves playing in the type of atmosphere that there will be on Centre Court," said Lloyd.

"He will embrace that he is playing the second best player in the world, on Centre Court and with a place in the quarter-finals at stake."

Will Murray avoid an upset?

Murray is the overwhelming favourite to earn a fifth successive win against Kyrgios and reach the Wimbledon quarter-finals for the ninth successive year.

And both Lloyd and Cash cannot see the Briton being at the receiving end of a shock.

"Andy will win," said Lloyd. "He might drop a set, possibly two, but he will come through."

Cash added: "I think Nick will definitely get a set, but it will be a Murray victory."