Two-time Wimbledon champion Petra Kvitova has been knocked out of Wimbledon in the second round.

The match restarted with Kvitova trailing by a set, after rain delayed the match from Friday, but the 2011 and 2014 winner could not turn it around.

Kvitova hit 43 unforced errors as she was beaten in one hour and 53 minutes, in what was the final second-round match to be completed in the women's draw.

Makarova, ranked 35th in the world, will face Barbora Strycova in round three and may have to play on Sunday, Monday and Tuesday because of the backlog of matches caused by rain delays throughout the first week.

Kerber saw off four set points in a marathon first set lasting over an hour to overcome her 21-year-old opponent, ranked 109th in the world.

She led 2-0 in the second set before a two-hour rain delay, after which the players returned for just 15 minutes before a second weather interruption.

After the resumption, Kerber won two straight games to seal the match and set up a fourth-round tie against Japan's Misaki Doi.

Radwanska progressed into round four by beating Czech 20 year-old Katerina Siniakova 6-3 6-1 in 63 minutes late on Friday evening on court three.

The former finalist broke serve in the sixth game of the first set to take control, and cruised through the second set against a player ranked 111 places below her.

Radwanska's 2012 Wimbledon runner-up result remains her only Grand Slam final appearance despite ending every year since 2008 inside the world's top 15 players.

The Pole made just seven unforced errors against Siniakova and will play Cibulkova in the fourth round.

Halep who has reached the fourth round for only the second time, will face American ninth seed Madison Keys next.

There were five breaks of serve in the opening set, which Halep won before racing into a 4-1 second-set lead en route to victory in 69 minutes on Centre Court.

She said: "I'm really excited that I'll play the fourth round. It was amazing today, I played good tennis and I'm happy I could win in two sets."

Round two completed after rain 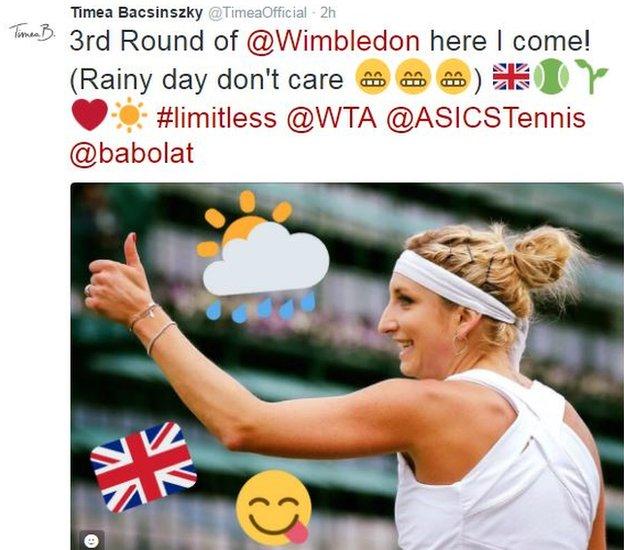 Swiss 11th seed Timea Bacsinszky will face Anastasia Pavlyuchenkova in the third round after a 4-6 6-2 6-1 win over Monica Niculescu.

Sloane Stephens, the American 18th seed, overcame a match point on Friday night before returning to reach round three with a 3-6 7-6 (8-6) 8-6 over Mandy Minella and will face Svetlana Kuznetsova.