Beaten champion Novak Djokovic admitted he was "not really 100%" during his shock Wimbledon defeat by Sam Querrey.

Djokovic, seeking a calendar-year Grand Slam, appeared out of sorts but afterwards did not want to detract from his opponent's triumph.

"It's not a place and time to talk about it," he said on his performance.

The 2016 Australian and French Open champion said he was hurt by his exit, but added: "I managed to win four Grand Slams in a row over two different seasons. I want to focus on that rather than on failure."

Asked if he was concerned in any way coming into the match after racking up an Open-era record of 30 consecutive Grand Slam match wins, Djokovic said: "No. Why would I be?"

When it was suggested that he didn't seem himself during practice on Court 14 earlier in the day, the 29-year-old replied: "I just said I don't want to talk about it. Please respect that. Thank you."

Some observers took that to mean the 12-time Slam winner might be hiding an injury or another issue, while others pointed to tennis etiquette of not taking away from an opponent's triumph.

2015: Rafael Nadal lost 7-5 3-6 6-4 6-4 to Dustin Brown, a German journeyman who once travelled around Europe's Challenger Circuit in a camper van.

Defending champion down and out

Djokovic gave a thumbs up to his big-serving opponent after bowing out in a fourth set tie-break, and took time to sign autographs after he left Court One, though conceded it was not his favourite court.

It was the first time a defending champion had lost in the third round, and he appeared tired but philosophical in a packed post-match press conference convened just 20 minutes after his loss.

Djokovic, a three-time winner at SW19 who had never previously lost a set at Wimbledon to an American player, had reached the last 16 of the tournament seven years in succession.

It was his first defeat in a Grand Slam third round for seven years - when ousted as fourth seed in the 2009 French Open by Philipp Kohlschreiber.

"The top players only play outside Centre Court once in the tournament and this was Novak's turn on Court One.

"He struggles on there, even when he goes on to win the tournament. In 2011 he lost a set against Bernard Tomic when he played there.

"In 2014 he went down two sets to one to Marin Cilic and last year he was two sets down to Kevin Anderson. He also lost to Tommy Haas on Court One in 2009."

An opening for Andy Murray?

At 17:04 BST on Saturday, Djokovic was out of the 2016 Wimbledon tournament. Exactly an hour later, Britain's second seed Andy Murray was into the last 16.

The Scot beat Australian John Millman to reach the fourth round without losing a set.

Bookmakers now make the 2013 champion an odds-on favourite to follow up this year. Seven-time victor Roger Federer, in the opposite side of the draw, is rated his main danger.

News of Djokovic's defeat on Court One brought cheers from the Centre Court spectators when relayed during a break in Murray's match.

But Murray refused to look too far ahead, saying: "I need to reach the final for that result to have any bearing at all on my performance."

He added "Rather than a surprise we should be celebrating what Djokovic's done because he's broken so many records and won 30 consecutive Grand Slam matches in a row which is incredible. It's probably been the best 12 months in tennis for years."

•He had not made it past the first round in the two previous majors of 2016 - retiring because of cramp after the fourth set of his opening match against Dusan Lajovic at the Australian Open and losing to Bjorn Fratangelo in the French Open.

•In 2015, Querrey took part in TV dating show, Millionaire Matchmaker, in the US. "The date was fun, the girl I chose was really cool. At the end of the episode it said we're still together, but actually she never talked to me once after the show was shot."

The American victor, ranked 41 in the world, is into the fourth round at Wimbledon for only the second time in nine appearances.

"It's an unbelievable win. To do it here at Wimbledon is really special," said 28-year-old Querrey, who served 31 aces in his win and faces unseeded Frenchman Nicolas Mahut next.

In an interview with BBC Radio 5 live's Sonja McLaughlan, Querrey's coach Craig Boynton said: "He's had some ups and downs but to come through on this occasion, I'm just so happy for him.

Asked what his coaching secret is, Boynton said: "If I knew, I would be able to tell you but sometimes a blind squirrel finds a nut. It's all Sam." 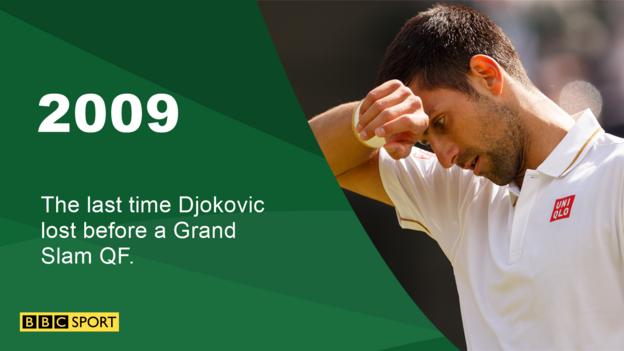 "Djokovic's defeat is completely shocking, obviously. Sam Querrey is someone that in America we've been concerned about whether he has the competitive juices to wrestle with the top players.

"With Serena last year so close to the Slam, and Novak this year, we see how difficult it is to maintain that intensity for so long."

"If I was questioning something about Djokovic it would be more mental than physical. There was a lot of eye contact with his box. Normally he is so clear in his mind and the consistency of his performances in the majors has been unbelievable. Today it was so up and down.

"It was a bizarre performance. We haven't seen anything like that from Djokovic for a long time."

What next for Djokovic?

Djokovic said he wants to "get away from tennis" for a while and will sit out Serbia's Davis Cup quarter-final against holders Britain in Belgrade from 15-17 July.

He will consider where he plays next, although Rio in August has been a target for the world number one who has won all four Slams and a Davis Cup, but not Olympic gold.

"Thankfully I have a family and I have a life outside of tennis. I have plenty of things to look forward to," he said.

"It's been a very successful year so far, but a very long one, exhausting one, in every sense of that word. I just need some rest."