Britain's Andy Murray says he needs to remain focused as he prepares to take on Jo-Wilfried Tsonga in the men's quarter-finals at Wimbledon.

Second seed Murray has yet to drop a set at this year's tournament and the 2013 champion is the highest-seeded player remaining in the men's draw.

But the 29-year-old described Frenchman Tsonga as "one of the best grass-court players in the world".

"If he plays well, I'm not on my game, I can lose that match," said Murray. 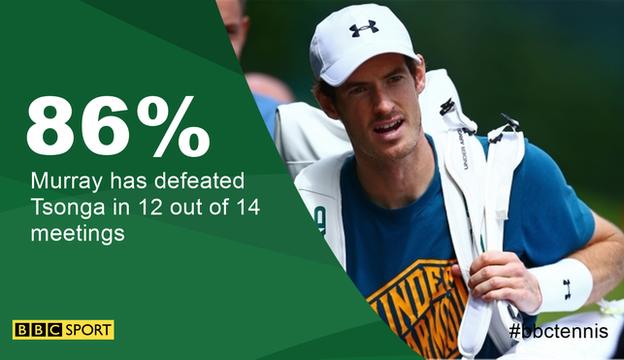 Murray, competing in his ninth consecutive Wimbledon quarter-final, has beaten Tsonga in 12 of their 14 encounters - twice at Wimbledon.

The Scot beat the 12th seed in the quarter-finals in 2010 and the semi-finals two years later, both in four sets.

"Both matches were hard," said the two-time Grand Slam champion.

"A few of the sets came down to just a couple of points. I'm aware I'll have to be playing at my highest level to win.

"I think if I play the level I'm playing at just now, I give myself a chance in most matches.

"But the trick is to keep that up, to maintain that level for the whole two weeks. I've done a good job of it so far. I do feel like when I've needed to in the tournament, I have played some good tennis."

Murray playing 'better than anyone'

Murray has been impressive in this tournament - BBC pundit John McEnroe says the Briton is "playing better than anyone" - and for the first time in his career he is the highest seed remaining at a Grand Slam.

But the Briton, who has lost only 34 games in four matches and served up one double fault, has refused to talk about his chances of winning a second Wimbledon title.

"When I was younger it was much more difficult to stop myself getting carried away with how I was playing or who I was playing," Murray said in his BBC Sport column.

"When I hadn't won a Grand Slam it was like, 'This is my chance. I might do it.' And then, if it didn't happen, I was gutted. Nowadays, I know how difficult these events are to win and I take nothing for granted any more."

Like Murray, third seed and seven-time champion Roger Federer has not had to go beyond three sets at this tournament. 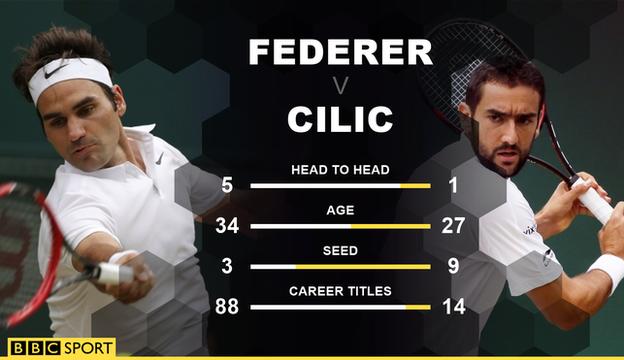 More records could be broken on Wednesday if the 17-time Grand Slam champion beats Marin Cilic on Centre Court.

Victory over Cilic would ensure Federer equals Jimmy Connors' record of 11 Wimbledon semi-final appearances and draws level with Connors on a record 84 wins at Wimbledon.

Federer, aged 34 and 336 days, would also become the oldest man in the open era to reach the Wimbledon semi-finals since Ken Rosewall (39 years and 246 days) finished runner-up in 1974.

But Federer is still bruised by his US Open semi-final defeat by Cilic in 2014.

"He blew me off the court at the US Open. I know what I'm getting into," said Federer of the ninth seed, who has been broken just three times in this tournament.

"I didn't play poorly in any way. It was just all on his racquet. It was very seldom that I was blown off the court like that. It was unbelievably impressive."

A first for Querrey and Pouille

While Murray, Tsonga, Federer and Cilic are in familiar territory, first-time Grand Slam quarter-finalist Sam Querrey is aiming to become the first American to reach a Wimbledon semi-final since 2009.

Querrey, who defeated defending champion Novak Djokovic, will come up against sixth seed Milos Raonic on Court One.

France's Lucas Pouille, the 32nd seed, has also reached the quarter-finals at SW19 for the first time.

Pouille has never played his last-eight opponent Tomas Berdych, the 10th seed who is through to his 15th Grand Slam quarter-final after seeing off fellow Czech Jiri Vesely in a five-set match over two days.