Defending champion Serena Williams says elder sister Venus is "super inspiring for me" as they attempt to set up a fifth all-Williams Wimbledon final.

"With everything she's been through, I think it's built a ton of character in her, and in me by just being around her," said 34-year-old Serena.

"She has a lot of perseverance, she's a real fighter."

Six-time champion Serena has won three of the four all-Williams' finals, with the last coming in 2009.

'We don't talk about playing each other'

Five-time champion Venus, who last won the title in 2008, is appearing in her first Grand Slam semi-final since the 2010 US Open.

She is the oldest major semi-finalist since Martina Navratilova was runner-up at Wimbledon in 1994.

Venus, who slipped outside the world's top 100 in 2011 after being diagnosed with the immune system disorder Sjogren's syndrome, says the American sisters have not discussed the prospect of facing each other in Saturday's final despite playing doubles together.

"We get out there and we're focused on that moment because we have to be. So the talk about what could happen is not as important as what's happening in that round," she said.

"Of course, this is great for both of us. But when you're a player, you're so focused on the next match, and that's what we're both focused on." 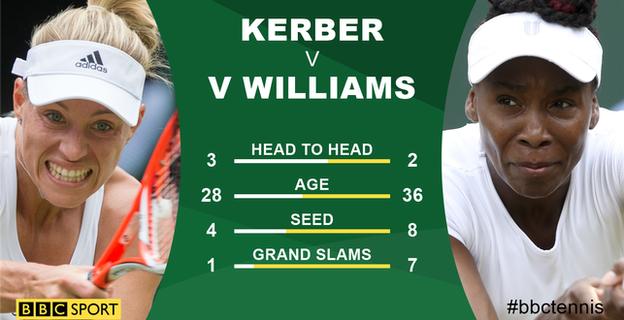 German Kerber, the fourth seed, has moved impressively through the draw without dropping a set.

She defeated Serena Williams in the Australian Open final in January for her first Slam title, but lost in the first round of the French Open.

After beating Simona Halep in the quarter-finals, Kerber said: "I'm playing really good tennis right now... I think I'm playing like in Australia. I know I can win such tournaments.

"When I came onto the tour the two Williams sisters were always the top favourites but in the meantime I have won against them both and so the respect is there. So my perception of them both has changed over the years."

"We've had a lot of great matches, she and I," Venus Williams said of Kerber, who has won three of their five previous matches.

"We haven't played in a while and clearly she's had a great year with a great result in a Slam, but I'd love to be walking towards the final." 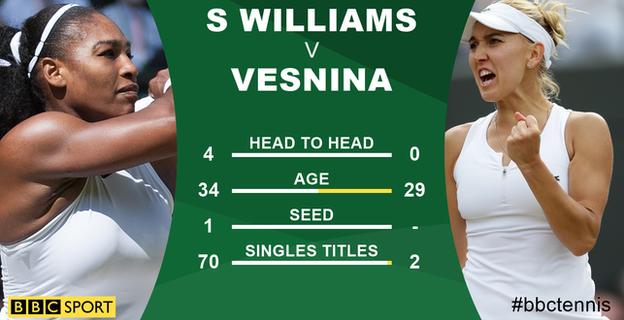 It would be one of the biggest shocks of modern times if world number 50 and doubles specialist Vesnina could defeat Serena Williams and reach her first Grand Slam final.

After reaching the last four, the Russian joked that she was being inspired by 'the Lendl effect', a hashtag that sprung up after Andy Murray reunited with coach Ivan Lendl last month.

"Bruno Soares, my mixed doubles partner, he tweeted three weeks ago at the Queen's tournament, there is, with a hashtag, a Lendl effect, because he's playing with Jamie Murray, who is brother of Andy Murray, who won Queen's.

"There's definitely a Lendl effect. I tweeted them back, 'I'm your partner in mixed doubles'. He said, 'You will see, you will get it'. And now I am in semi-final of Wimbledon. There is something in it."

"She's also very aggressive, she comes to the net. I know her game really, really well. It's good to play someone's game that you know."

What do the pundits think?

Nine-time singles champion Martina Navratilova told BBC Sport: "It's hard to go against the Williams sisters both reaching the final because they have been there so many times.

"Serena seems to get better and better as a tournament goes on and you cannot go against her.

"Vesnina is the surprise package. It has been an amazing effort from her to come out of nowhere. She could play the match of her life and go through.

"For Venus, a lot of balls will be coming back from Kerber, who is playing her best tennis since the Australian Open.

"Mentally, she can handle winning Wimbledon - she's done it [won a Slam] by beating Serena Williams in Melbourne. That hurdle has been cleared.

"It comes down to whether her game is good enough. She needs to play brave tennis. But I'd say maybe a slight edge to Venus."

Lindsay Davenport, the 1999 champion, said about Serena: "Something she does so much better now than she used to do is learn from the losses. Now I think she takes the time to think about 'what I didn't do right, what do I need to make better'. She really wants it.

"She's mastered the two biggest shots in tennis - the serve and return - and no one else can really do that in women's tennis."