During two weeks in early summer, about half a million spectators converge on a corner of south-west London to watch a spot of tennis.

Here we discover some of the more unusual facts and characters that make Wimbledon a uniquely British sporting occasion. 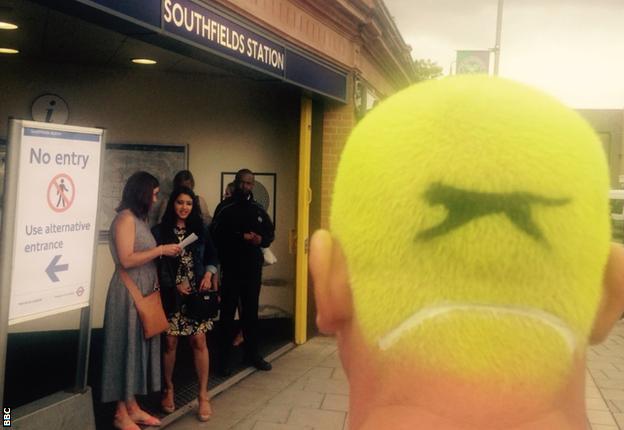 A distinctive sight greets travellers as they head out of Southfields tube station, about a 15-minute walk away from the grounds of the All England Lawn Tennis Club.

Tony Sedgwick is a taxi driver and a grandfather. He has also transformed his usual greying locks to bright yellow so that his head resembles a tennis ball. Only at Wimbledon.

"I got a number two haircut, bleached it myself and then one of the other cabbies colours it in with face paint," said the 51-year-old. 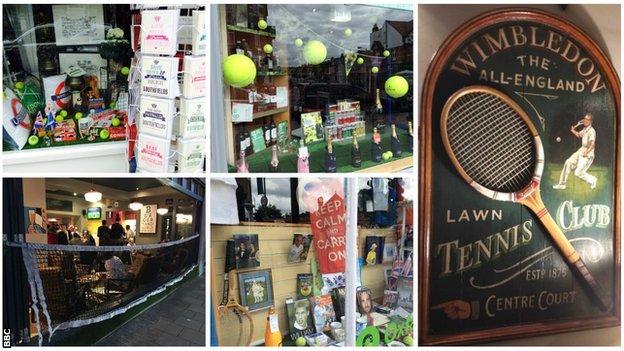 Cafes, pubs, restaurants and other local businesses get into the spirit of Wimbledon fortnight with special displays and decorations.

Charity shops are a good place to snap up some SW19 bargains - official programmes from previous years can be bought for as little as 99p, in some cases five times less than their original prices. 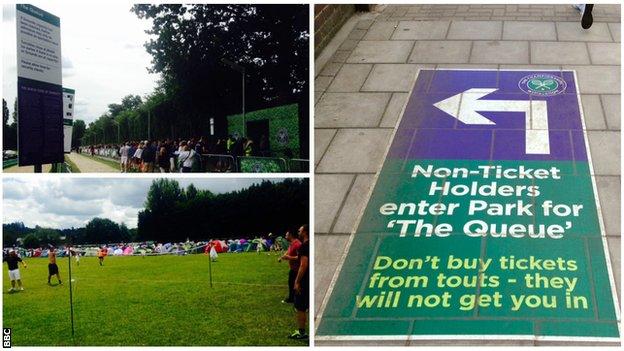 "The best free campsite in Britain," the attendant chuckles as punters flood into Wimbledon Park, across the road from the main venue and its 19 grass courts.

While members of the public can enter a public ballot for tickets in September, those who miss out can queue for tickets early in the tournament, with the first 500 guaranteed a spot on Centre Court.

Dozens camp overnight as the park becomes a mini festival, with burgers, coffee and ice cream among the food and drink for sale during the day and into the evening. 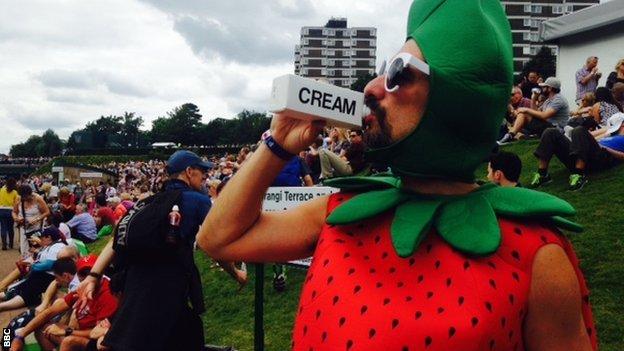 Tennis fan Chris Fava travelled more than 5,000 miles from his home in California to visit what he calls the "hallowed ground" of Wimbledon.

"Venice Beach is crazy, but this is bananas," said the 40-year-old dressed as a strawberry.

The creative director's creations at previous tournaments included coming in fancy dress as "Sky Man, a daisy, and Mister Sunshine". 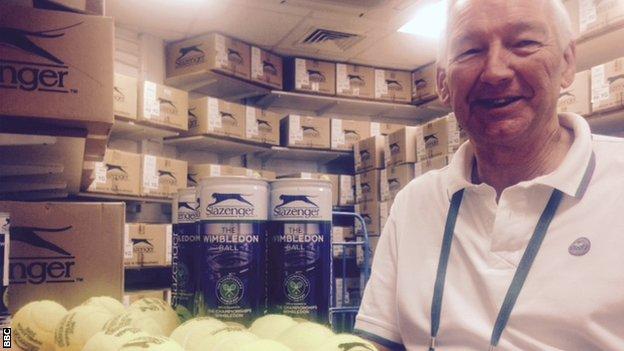 "We order 57,600 which covers qualifying, practice and the tournament matches, and probably use 53,000," says Brian Mardling, manager of ball distribution.

The balls are stored in a temperature-controlled room at 20C (68F) and used balls can be snapped up by spectators for £3 a can of three.

Yellow balls were introduced for the first time in 1986. The balls are changed after the first seven games, and every nine games after that.

Courts in the act 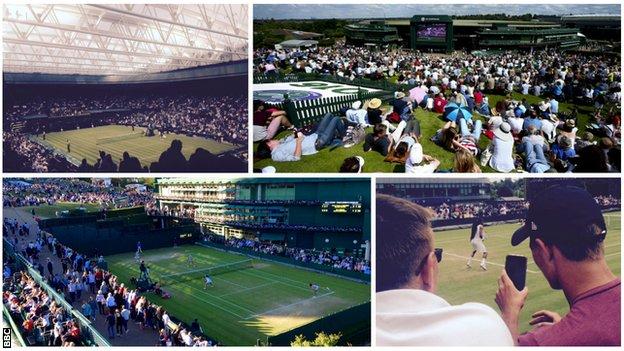 Delays caused by rain have receded since Centre Court welcomed a retractable roof in 2009. In that first year, Andy Murray beat Stan Wawrinka in a match that ended at 10.39pm.

Murray was also involved the latest ever finish at SW19 when he beat Marcos Baghdatis in 2012 in a match that concluded at 11.02pm.

The grass at Wimbledon is maintained at a height of 15mm during the winter and 12mm in the summer, except during the tournament when it is trimmed to 8mm.

It is a gradual reduction so that the grass does not "go into shock". 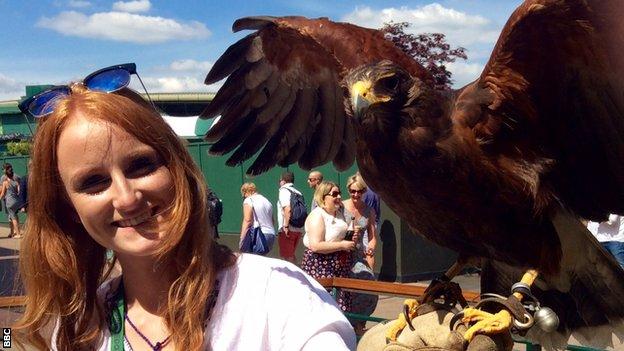 Every day of Wimbledon is an early start for bird scarer Rufus the Hawk, who flies from 5am to 9am.

"He's king of the Centre Court," says Imogen, who has helped look after the bird, aged nine, since he was 16 months old.

Keeping to the rules 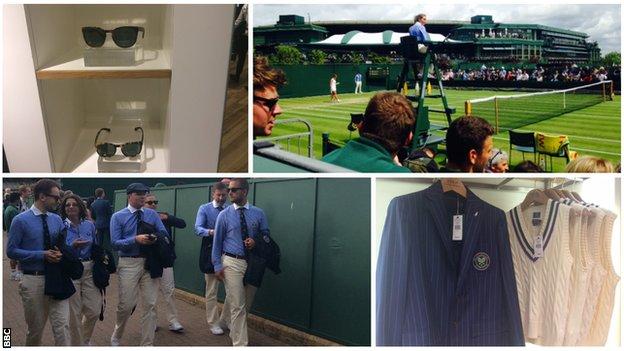 There are 350 match officials at the tournament - umpires, chair and line judges - and each is kitted out in identical gear.

If you like their sunglasses, you can pick up a pair for £99 in the Wimbledon shop, but you will need £650 if you fancy a lady umpire's blazer. 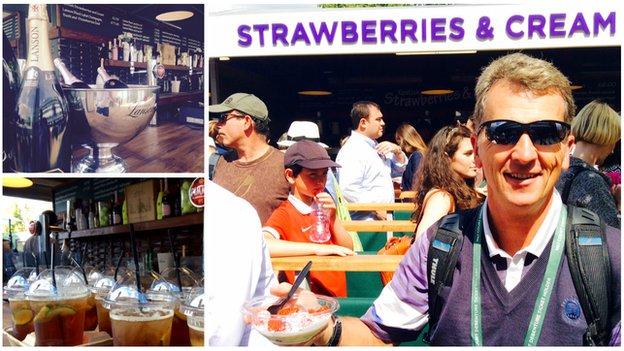 Like a hot roast? That will set you back £7.30. Worth noting it is 'slow cooked pork in Artisan Focaccia Romana bread'.

Throwing in the towels 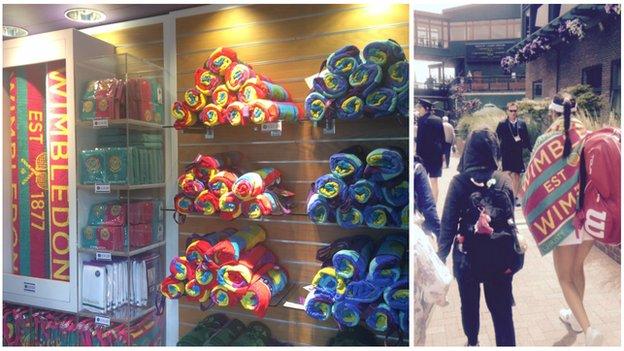 Towels are a topic of conversation at Wimbledon, where they retail for £29.

The All-England Club provides two towels - green and purple for the men, pink and orange for the women - for each match, which the players are told to leave behind.

Screens - and lots of them 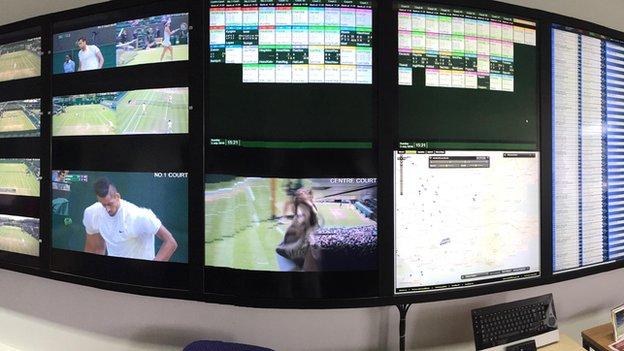 Fifteen staff work in the referee's office, monitoring the play, schedule and scores. 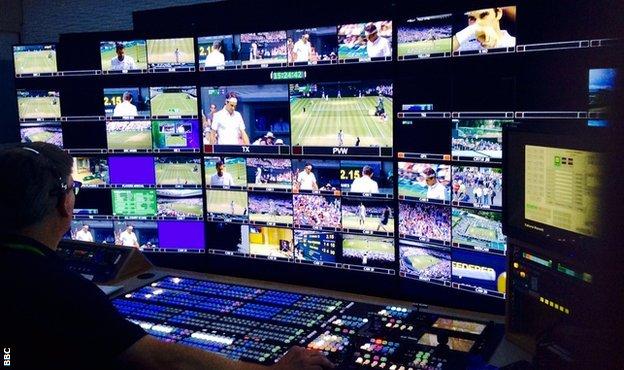 Last year, the men's final drew a peak TV audience of more than nine million on BBC One, with others following online and on BBC Radio 5 live.

Wimbledon has its own TV and radio station. The official website, which had over 540m page views in 2015, also has a dedicated Chinese version. 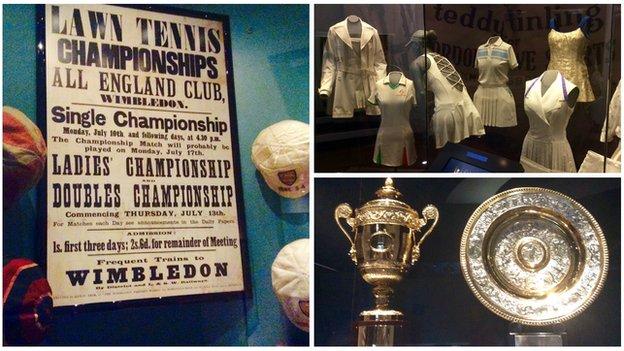 History hits you at every turn at this tournament, which first took place back in 1877.

There is an extensive museum on site, which boasts its own library and a stunning new virtual reality experience.

A poster from the 1893 tournament has been restored after being found 12 years ago by a member of the public and posted to Wimbledon. It had been at the back of a mirror for 110 years.

And finally... a footnote