Roger Federer's longevity is down to the seven-time Wimbledon champion loving tennis more than any other player in history, says John McEnroe.

The Swiss, 34, meets sixth seed Milos Raonic - who is advised by McEnroe - on Friday in his 11th SW19 semi-final.

"I've never seen someone love playing as much as Roger. That's the thing what I admire more than anything about him," said McEnroe, a three-time winner.

"The one thing I wish I could have taken from him is his joie de vivre."

The American added: "He's so competitive but is able to shrug off his losses so well."

Federer, a 17-time Grand Slam winner, has already won more major titles in the Open Era than any other man and is gunning for an eighth Wimbledon title that would move him into an outright lead ahead of Pete Sampras.

The third seed showed remarkable determination to reach the last four, fighting back from two sets down to beat Croatian ninth seed Marin Cilic on Wednesday.

Now he faces another tough test against Raonic.

"It is going to be an interesting battle and about how well Roger can handle Milos' serve and forehand," Lleyton Hewitt, the 2002 Wimbledon champion, told BBC Sport.

"I give Federer a good chance because he played himself into form in the quarter-final against Cilic.

"He has the added confidence now of thinking he could have been out of the tournament, surviving a scare and is now in another semi-final.

"Roger, physically, could be feeling it after the Cilic match, but the kind of match he is going to have to play against Raonic will be nowhere near as physically taxing.

"It will be quicker, deeper points out there."

'Everyone admires how Federer handles expectation'

Federer tried to play down expectations ahead of this year's tournament, claiming he was not even thinking about reaching his 28th major final after an injury-hit year.

The Swiss needed knee surgery in January - after injuring himself running a bath for his twin daughters - then pulled out of last month's French Open with a back injury.

"He's starting to get a couple more niggles than he has had in the past but it is all about how well he has handled his body for so many years," said Hewitt.

"He plays a real efficient type of tennis, how he moves around the court is different to a lot of other players. We're harder demanding on our bodies in some way.

"How he handles the pressure and expectation is remarkable. Every time he goes on court he is top dog and someone is trying to knock him off.

"That is not an easy thing to deal with and very few before have been able to stay at the game for so long.

"That is what everyone admires about him."

How will Federer cope with Raonic's new-found aggression?

Many experts believe 25-year-old Raonic, aiming to become the first Canadian man to reach a Grand Slam final, has the tools to push Federer all the way.

The 6ft 5in right-hander has added more aggression into his game since McEnroe joined his camp, blasting down 114 aces - more than anyone else in this tournament - and stepping forward more to pressurise his opponent.

"His match against Andy Murray at the Australian Open, despite him eventually losing in five sets, was the best I had seen him move, especially around the baseline.

"Now he has taken that onto the grass court.

"He has such a dangerous game, not just his serve but also his forehand. He is learning to move a lot better coming forward into the net and that has added another dimension to his game.

"But we saw in the 2005 final against Andy Roddick how Federer was able to beat heavy firepower."

How do you brush off Federer's aura?

Arguably the greatest player of all time is staring back at you from across the net. He's playing on his favoured surface. In a venue where he has been there, done it and won countless times - including a 2014 semi-final win against Raonic.

Do those factors combine to leave his opponents - even those who have also won Grand Slams - slightly nervous?

"When he was at the top of the game it was hard to escape that aura he had," said Hewitt, who lost to Federer in the 2005 Wimbledon semi-final.

"He was hardly losing matches through the year. I always knew it would be awfully tough and knew I would have to play on the edge a little bit.

"Everyone needed to play as well as they possibly could and need him to be a little bit off.

"That's easier said than done. At his very best, his sliced backhand and how he was able to change pace was key.

"It will still be key in this year's semi-final because Raonic will be trying to hit ball as hard as he can.

"It is about whether Roger can block those balls and then use his net game with his sliced backhand to be effective." 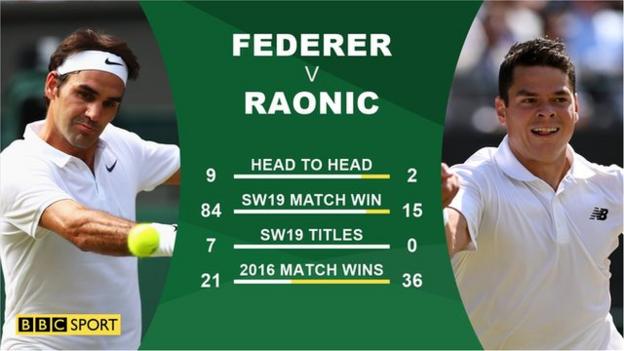