Murray saw off Czech 10th seed Berdych 6-3 6-3 6-3 on Centre Court, and is one win from repeating his 2013 triumph and winning a third Grand Slam title.

The Scot, 29, overtakes Fred Perry in reaching an 11th major final - a new record for a British man.

I've got one more to go - Murray

Murray might have played in 10 previous Grand Slam finals but Sunday will provide a new experience - his first major final without Novak Djokovic or Roger Federer across the net.

The British number one has a 6-3 record against Raonic, and beat the Canadian in the Queen's Club final ahead of Wimbledon.

"Obviously to make a Wimbledon final is a good achievement and I've got one more to go on Sunday," Murray told BBC Sport.

"The older you get, you never know how many chances you're going to get to play in a Grand Slam final. I'm glad I managed to get through today.

"You learn from those matches for sure, those experiences in the past have helped me a lot, playing against some of the best players of all time."

No alarms as Murray dominates

Murray had won their last four matches and a double-fault from Berdych on break point in his opening service game suggested the Czech was not exactly brimming with confidence.

Berdych, 30, recovered the break straight away, and dominated the exchanges for a few games as Murray offered up too many short balls, but the Scot stepped it up when required.

Constantly moving the 10th seed from side to side, he began to draw errors, an errant Berdych forehand giving Murray a 5-3 lead before an ace clinched the set.

There was a flurry of resistance from Berdych midway through the second set, and Murray was animated in gesturing to coach Ivan Lendl and his player box, but a fine second serve and some more relentless defence staved off two break points.

With that fleeting chance having slipped away, Berdych's resistance faded and Murray broke twice more on his way to a two-set lead, whipping a forehand pass down the line on set point.

Murray had let a similar lead slip against Jo-Wilfried Tsonga in the quarter-finals but there was no repeat this time, and the Centre Court crowd roared as one stunning lob helped the Briton to a 4-1 lead in the third set.

Such is his experience at this stage of Grand Slams, there were no alarms - and no sense of uncertainly among those watching - as Murray calmly served his way to victory in a little under two hours.

Lleyton Hewitt; 2002 Wimbledon champion: "A very impressive performance from Murray. He knew what he had to do and he had his game face on right from the start and was able to break early on. He and his whole team will be thoroughly pleased."

Richard Krajicek, 1996 Wimbledon champion: "Mentally, Murray is so strong. He doesn't let up. I love the way you didn't get a feeling that Berdych had a chance of coming into the match. I love his focus and not getting upset. A totally different Andy Murray than the one of two days ago. "

Russell Fuller, BBC tennis correspondent: "Murray's lost far too many for his own liking. It's his 11th Grand Slam final, he's lost eight of those. He's always played Djokovic or Federer so we're in uncharted territory with Murray being the favourite.

"It doesn't matter how much advice John McEnroe will give Raonic, he will not know how it feels once he gets out on that court and that's one advantage for Murray." 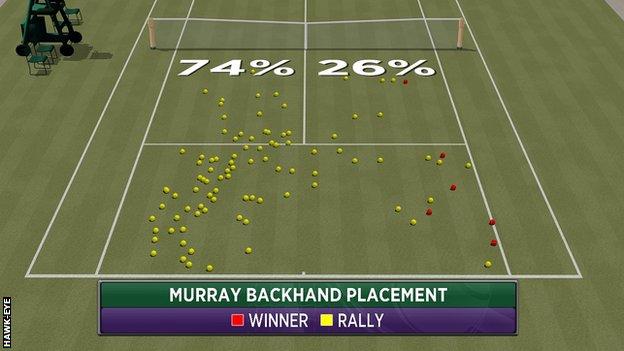 Murray picked his points on the backhand, hitting 74% of those shots to the ad side then pulling the trigger up the deuce line when he needed to. As you can see in this Hawk-Eye graphic, Murray hit six backhand winners on that side despite only directing 26% of his backhand shots there.