Britain's Andy Murray became Wimbledon champion for the second time with a superb performance against Canadian sixth seed Milos Raonic in the final.

Murray is the first British man to win multiple Wimbledon singles titles since Fred Perry in 1935.

"I'm proud to have my hands on the trophy again," said Murray.

Murray gave a famously tearful speech after losing his first Wimbledon final against Roger Federer in 2012.

Twelve months later, he finally ended Britain's 77-year wait for a male champion - and the chance to see him repeat the feat attracted huge attention.

Spectators queued overnight just to grab a spot on Henman Hill, while the Duke and Duchess of Cambridge and former champions Bjorn Borg, Stefan Edberg and Boris Becker were among those watching from the Royal Box.

"This is the most important tournament for me every year," added an emotional Murray.

Murray rises to role of favourite

Murray was playing his 11th Grand Slam final and for the first time he was the favourite, having faced either Novak Djokovic or Roger Federer in the previous 10 finals.

He appeared to relish the role, ignoring the magnitude of the occasion to claim a sixth successive win over Raonic.

The 25-year-old Canadian was making his Grand Slam final debut, helped along the way by John McEnroe, who was in the opposite coaching corner to his old rival Ivan Lendl.

Whatever insights those two legends were able to pass on, the final came down, as expected, to a contest between serve and return, with the latter coming out on top.

Raonic went into the match with 137 aces, but it took him five games to add a 138th as Murray dialled in early on the return, just as he had in winning their Queen's Club final three weeks ago.

A blustery wind on Centre Court was not helping the Raonic serve and he was under pressure early on, seeing off two break points before Murray converted a third to lead 4-3.

That was enough to give the Scot the set and he continued to press in the second, earning four chances to break again but finding the net each time.

Raonic was unable to respond, failing to conjure up a single break point, but a tie-break offered the Canadian a chance to serve his way back to level terms.

Murray was having none of it, taking advantage of a slightly fortuitous early break to surge ahead with some magnificent defence and a rasping backhand winner.

At 6-1 down, there was no way back for Raonic - and when Murray clinched his third set point even the implacable Lendl was moved to applaud.

An unexpectedly routine contest came to life at the start of the third set when Raonic finally had two break points, only for a fired-up Murray to play his way out of trouble.

The world number two pumped his fist and roared in the direction of his player box, and when it came down to another tie-break, Murray again found his very best when it counted.

A brilliant backhand winner set him on the way to another 6-1 lead and, with the crowd chanting "Andy! Andy!", he pummelled a forehand into the corner on his second match point that Raonic could only return into the net.

How Murray dealt with Raonic's power

In his previous 10 Grand Slam finals, Murray had only won 67% of his first-serve points - but it was a different story against Raonic as he won 87% of the points behind it.

He was not afraid to direct the majority of his serves to Raonic's strength, the forehand, and incredibly only lost one point when he did so in the match. In fact, over the course of both tie-breaks, Murray directed every first serve to the Raonic forehand.

The fact Murray was able to hold so comfortably throughout the match - he only faced two break points - meant that he could be ultra aggressive when returning.

He was able get 74% of his returns back in play and put pressure on the Raonic serve, which suffered under pressure, especially in the tie-break where the Canadian only won 44% of his service points. 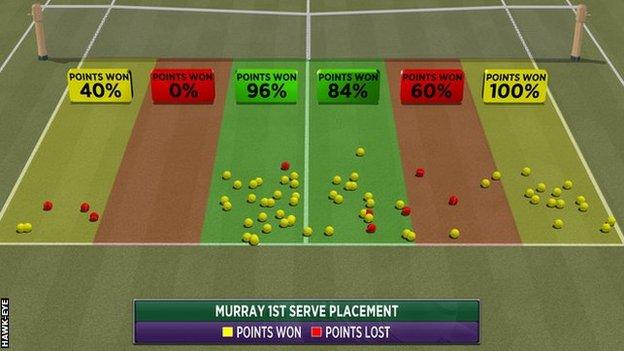 You know he'll get returns back - Raonic

The Canadian fired down the biggest serve of the tournament at 147mph, but it was still not enough, the Briton winning the point with a brilliant pass.

"He moves incredibly well, he returns well - those are his two biggest strengths, and he's been playing well," said Raonic.

"Every time you play him, you know he's going to get more returns back than anyone else, along with Novak."

Boris Becker, three-time Wimbledon champion: "Obviously, the big one is always the first one and once you break that duck there's room for more. He's 29, at the peak of his career, so I'm sure he's going to be up for a few more Grand Slams.

"Grass is his most natural surface, and he's always going to be a big threat at Wimbledon. Hard court is a great surface for him too. He'll be winning a couple more."

Lleyton Hewitt, 2002 Wimbledon champion: "Andy Murray is always trying to improve. It couldn't have been easy losing the Australian Open for a fifth time this year, and then losing to the one guy who's held the weight against him for so long in Novak Djokovic at the French Open, despite having taken the first set.

"I'm really pleased for him. You do put so much into this, he will be so relieved now."

Tim Henman, four-time semi-finalist: "Murray delivered in every aspect, it really was an amazing finish to a fantastic fortnight for him. He stamped his authority, got up 5-0 in both tie-breaks. His first serve percentage, he only made nine unforced errors... Murray used all his skills to keep making Raonic play and make life difficult and it paid off."

Pat Cash, 1987 Wimbledon champion: "It was almost a faultless tournament from Andy. It was so special. He perhaps had one blip by losing a set against Tsonga. How often can you say that?"