As a hugely successful former coach to Grand Slam winners Kim Clijsters and Victoria Azarenka, Wim Fissette was not short of job offers for the 2017 season.

But after British number one Johanna Konta made her interest clear, the softly spoken 36-year-old Belgian spotted a wonderful opportunity.

"From the outside, she looked like a very ambitious, hard-working player with a very strong body," Fissette recalled on the eve of Konta's Australian Open quarter-final against Serena Williams (02:00 GMT, Wednesday).

'No weaknesses - but she can be better in every aspect'

Fisette and Konta started working together a couple of weeks after her rewarding partnership with Esteban Carril reached the end of the road. The two had been unable to agree financial terms for the new year, but after a promising week with Fissette at the Mouratoglou Academy in Nice, Konta had a plan in place for the next stage of her career.

The omens are extremely encouraging. After losing in the semi-finals in Shenzhen in the first week of the year, Konta beat Agnieszka Radwanska for the first time in her career to win the prestigious WTA title in Sydney. She won 10 sets in a row in the process, and has now extended her unbroken run to 18 after four comprehensive victories in Melbourne.

"The more I know about her, the more I like her as a player," Fissette told BBC Sport.

"She's physically very strong, she's got a big serve - for sure top three in women's tennis - and she's got big groundstrokes. I think there's not a weakness in her game, but I do believe she can be better in every aspect."

What is so impressive is that 2016 should be such a hard act to follow. Konta won her first WTA title in Stanford, and finished as the runner-up in Beijing (one of the four most important tournaments on the women's tour) having started the year with that semi-final appearance at the Australian Open.

Players often struggle to reproduce the form of a breakthrough season, but Konta is bucking the trend.

"We've seen this time and time again on both tours," says Courtney Nguyen, a senior writer for the WTA Tour.

"You get a big result, you have a breakout season, and the following season you end up suffering a bit of a sophomore slump.

"It can be very difficult playing with that pressure of knowing what can be expected of you. What's so refreshing with Jo is that's just not how she sees the world. She takes it all in her stride."

It is also remarkable how Konta appears to have dealt so well with the end of her partnership with Carril, as well as the untimely death of her mental coach. Juan Coto was a vital component of her team and it was his counsel which helped kick-start her rapid rise through the rankings.

Konta prefers not to reflect publicly on that difficult period, or how she has adjusted so successfully since, which is perhaps a strategy of which Coto would have approved. 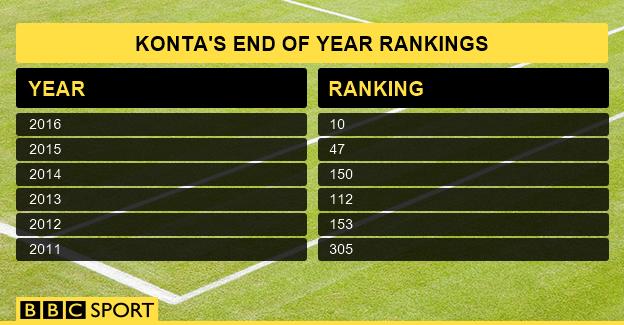 'There will be a day when she wins a Grand Slam'

The 25-year-old is now very much in demand with the international - as well as the British - media. She conducted six meaty television interviews - including with Australia's Channel 7 and the US-orientated Tennis Channel - after her fourth-round victory over Ekaterina Makarova.

She is increasingly confident in her conversations, happy to discuss changing her two-month-old nephew's nappy, and slowly but surely prepared to give a little more insight into her approach.

But will all this be enough to bring her victory over Serena Williams the first time they ever share a court together? Some opponents seem to have lost such a match in their mind before a ball is struck, but Konta is different and will genuinely, and quite rightly, believe she can win.

No other current player can quite compare to the 22-time Grand Slam champion, but Konta was not at all overawed by Serena's sister Venus in their three meetings. Two of them she won: in the opening round of last year's Australian Open, and then in the final in Stanford last July.

And Fissette's very first impressions of Konta are also worth recalling.

"The first time she played a player I was coaching - that was Victoria Azarenka in China - I was very impressed with the attitude she had," he says.

"She showed respect to the player but she was there to win the match. She came on the court with the belief that she could beat a top player like her and I still see that.

"I believe there will be a day when she will win a Grand Slam." 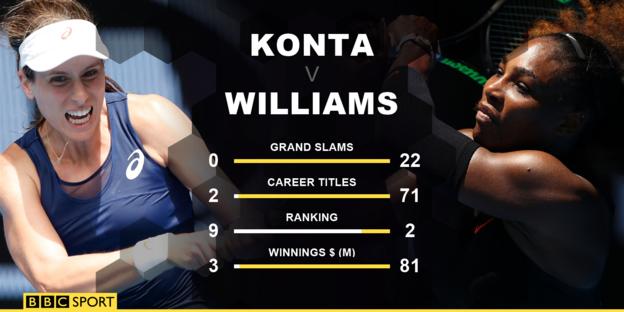