Seventeen-time Grand Slam winner Roger Federer says he did not expect to reach the Australian Open semi-finals after a six-month injury lay-off.

The four-time champion in Melbourne is making his competitive return after last playing at Wimbledon in July.

"If someone would have told me I'd play in the semis against Stan, never would I have called that one.

"For Stan, yes, but not for me. I honestly didn't even know a few days ago that he was in my section of the draw or I'm in his section." 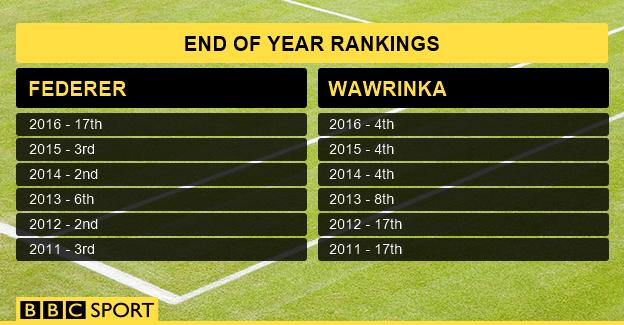 Federer, who has not won a Grand Slam title since triumphing at Wimbledon in 2012, had been sidelined by a knee injury throughout the second half of last year and has slipped from third in the world to 17th.

He played in the non-ranking Hopman Cup in Perth earlier in January, but has come through 18 sets in Melbourne.

"I think winning back-to-back matches in best-of-five sets against quality, great players has surprised me most," he said.

"Really that's been for me the big question mark, if I could do that so early in my comeback.

"I felt I was always going to be dangerous on any given day in a match situation. But obviously as the tournament would progress, maybe I would fade away with energy, you know, that kind of stuff."

'Roger's the best of all time'

Federer holds an 18-3 winning record against Wawrinka, but the 31-year-old will go into the semi-final as the world number four and looking for a second consecutive Grand Slam title after last year's US Open success.

Federer has won their past two meetings, at the ATP World Tour Finals and in the US Open in 2015, but Wawrinka holds a Grand Slam win against his Davis Cup team-mate, coming in the quarter-finals of the French Open in the same year.

"Against Roger, it's always special because he's so good. He's the best player of all time," said the three-time Grand Slam winner.

"He has an answer for everything. But I managed to beat him in a Grand Slam, so we'll see.

"It's great to see him back at that level. Hopefully I can manage to play a great match."

Stan, you don't call any more

All of Wawrinka's three Grand Slam titles have come since Federer won his last five years ago.

And Wawrinka's rise to becoming a consistent top-10 player did not come until he was aged 28, and after plenty of help from his fellow Swiss.

"I remember giving Stan a lot of advice on how he should play certain guys," said Federer.

"Then the day came where he didn't call me so much any more. He called me less and less.

"I also felt like I didn't tell him any more, because he created his knowledge, his base, had his team. Only from time to time would I give him advice if he asked me.

"Otherwise I was happy that he was able to let go and go on his own path."

Analysis - Can Federer get past Wawrinka?

It's a great match because Wawrinka wants to stay back and bludgeon the ball with huge swings and power.

Federer's job, in the lively conditions, is to take time away from Wawrinka and not allow him to get into that rhythm. Federer has to come forward and test Wawrinka's passing shots a lot.

That's important because I don't think Stan's the best passer in the world. Roger will be able to come in a lot because Wawrinka does chip and block a lot of first-serve returns.

The way Federer is playing, even though he has missed six months of tennis, I think he's maybe the slight favourite from what I've seen.