Nine-time winner Rafael Nadal and defending champion Novak Djokovic both won in straight sets to reach the third round at the French Open.

Nadal, the fourth seed from Spain, looked at his very best in outclassing Dutchman Robin Haase 6-1 6-4 6-3 in under two hours.

Nadal and Djokovic are seeded to meet in the semi-finals.

Eight-time Grand Slam champion Andre Agassi watched Djokovic once again, having taken over as the 30-year-old's coach on a temporary basis.

"I think the first two sets went very well, the third was was more difficult," said Djokovic after beating the world number 59.

"Generally, I felt better than the first round, so that's exactly what I wanted."

Nadal finished his match with a tally of 33 winners and only 13 unforced errors.

"I was more or less under control during the whole match, so I'm very happy. Winning in straight sets is always good news," said Nadal.

"I think I did a lot of things well."

His only defeats at Roland Garros were against Robin Soderling in the fourth round in 2009 and Djokovic in the 2015 quarter-finals.

Nadal has been in formidable form on clay this year, winning his 10th titles at Monte Carlo and Barcelona as well as his 30th Masters title in Madrid. 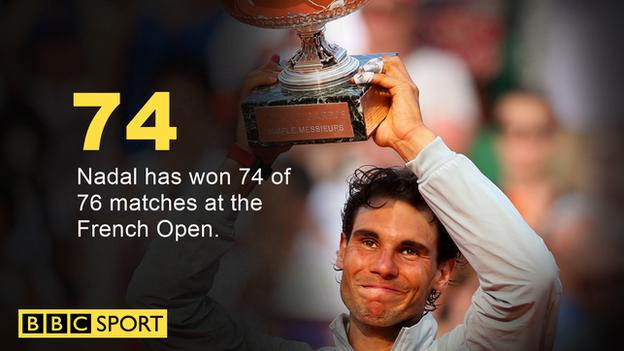 Lambs to the slaughter - analysis

There are three, maybe four, players that could possibly beat Nadal.

Stan Wawrinka is his biggest worry. He has the ability if he is on his game to play the most extraordinary tennis on this surface.

Of course you can't discount Novak Djokovic or Andy Murray and then Dominic Thiem who beat Nadal this year.

Everyone else are lambs to the slaughter when they go out to play Rafael Nadal.