Defending champion Novak Djokovic is out of the French Open following a straight-sets defeat by Dominic Thiem.

It is the Austrian sixth seed's first victory over Djokovic and he will now play Rafael Nadal in the last four.

Nadal reached the semis after fellow Spaniard Pablo Carreno Busta withdrew from their match with an abdominal injury while trailing 6-2 2-0.

Fourth seed Nadal is aiming to win a record 10th title at Roland Garros having become just the fifth man to reach 10 semi-finals at a single Grand Slam in the Open era.

Both matches were delayed from Tuesday because of rain.

Djokovic relinquishes the last of his Grand Slam titles

In 2016, Djokovic won the French Open title to become the first man since 1969 to hold all four Grand Slam titles at the same time.

Since then, the 30-year-old has lost in the third round at Wimbledon, suffered defeat in the US Open final, and lost in round two at the Australian Open. He has now failed to progress past the last eight in Paris for the first time since 2010.

"The last couple of tournaments I have had some great tournaments and it was unfortunate to finish Roland Garros in this way," said Djokovic.

"This is a whole new situation for me, not winning a big tournament for eight or nine months - this hasn't happened for a while.

"All the top players have gone through that and I have to learn lessons and figure how to get through. It is a big challenge and I'm up for it." 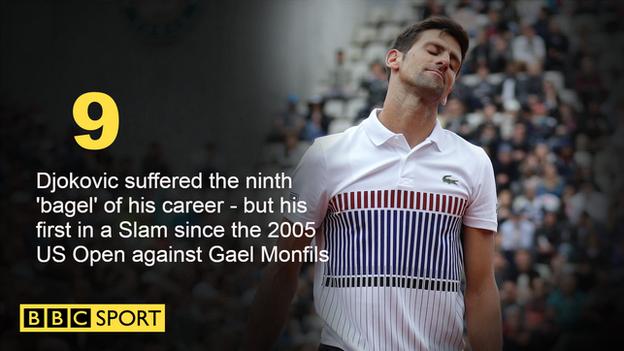 He was unable to cope with the power of 23-year-old Thiem, who hit 38 winners - 20 from his dominant forehand - in total to Djokovic's 18.

The match was a total reversal of the last time the two met, when Thiem managed to win just a single game three weeks ago in Rome.

Thiem demonstrated his appetite for the fight in a brutally physical first set lasting 73 minutes, which Djokovic led 4-2 but a double-fault handed a break back before three terrible backhands gave his opponent the tie-break.

Djokovic's mental and physical vulnerability was then ruthlessly exposed as Thiem took the second before emphatically sealing the third to love to take the match.

It was first time Djokovic has lost a set to love at a Grand Slam since the US Open in 2005.

"The third set, obviously, nothing was going my way and everything his way. It was a pretty bad set," added Djokovic. "I think it was decided in the first set, I tried but I lost a crucial break at the start of the second set.

"He deserved to win, he was definitely the better player on the court."

Nadal brings up his clay century

Tournament favourite Nadal, 31, has won the French Open title on each of the nine previous occasions he has advanced past the quarter-finals.

He has now recorded 100 best-of-five-sets victories on clay from just 102 matches, with his only defeats coming at Roland Garros, to Robin Soderling in the fourth round in 2009 and Djokovic in the 2015 quarter-finals.

Nadal has also dropped just 22 games through five matches in Paris, bettering his previous low of 25 en route to the last four in 2008.

He broke Carreno Busta four times to take the first set, at the end of which the world number 21 needed a lengthy break to have treatment and bandaging applied to his stomach.

"Thiem was magnificent throughout: showing patience when required in some gruelling first set rallies and using the drop shot and his single-handed backhand to great effect.

"He is the only man to beat Nadal on clay so far this year and may well be the best equipped to do so at Roland Garros.

"Djokovic looked punch drunk in the third set, in which he won only eight points. His backhand broke down regularly throughout, and his inability to make any inroads into Thiem's lead illustrated just how far he is from his best.

"As a result, Djokovic could drop to as low as number four in the world - and will definitely find himself outside the world's top two for the first time since March 2011."