The Serb is now without a major title after holding all four 12 months ago.

"I don't recall seeing a time in the last six to eight years when he 'mailed it in'," McEnroe told BBC Sport.

The American, a seven-time Grand Slam singles champion, added: "He basically gave up."

Djokovic won just eight points and made 12 errors in the final set of his quarter-final, which lasted 20 minutes.

It was only the ninth time he had lost a set to love in his career, and the first at a Grand Slam since he played Gael Monfils at the US Open 12 years ago.

"It looked in the third set like he just didn't want to be out there, couldn't compete any more, and that's shocking for a guy that's won as much as he has and prides himself on competition," added 58-year-old McEnroe.

"It just shows you everyone's human.

"On paper it was the most interesting quarter but to see it tail off like that is highly surprising.

"If you had told me a year ago, when he was the only guy since Rod Laver holding all four Slams that this is what we'd be talking about now, I'd have told you you were nuts."

Twelve months on from completing the career Grand Slam in Paris, Djokovic will drop out of the world's top two for the first time since 2011 in the next rankings.

"For me, it's a whole new situation that I'm facing," the Serb said.

"Especially in the last seven, eight months, not winning any tournament, which hasn't happened in many years.

"I guess you've got to go through it, try to learn your lessons and figure out how to get out of it stronger. 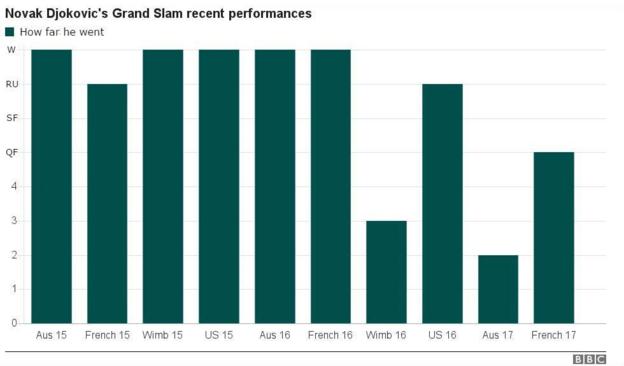 The 12-time Grand Slam champion alluded to "personal issues" following his shock third-round defeat by Sam Querrey at Wimbledon last year, and injuries then contributed to a drop in form.

Djokovic parted company with coach Boris Becker at the end of 2016 and then the rest of his coaching team, including his long-time confidante Marian Vajda, last month in what he described as "shock therapy".

He has since been working with Spaniard Pepe Imaz, a former world number 146 who runs a tennis academy based around "peace, love and meditation", as well as his brother, Marko, a former professional.

"Obviously there have been issues off the court," said McEnroe. "I don't know exactly what they've been but that's affected him.

"There's a let-down [after completing the career Grand Slam] and that's understandable when you think about it, after you've accomplished that you probably have some motivation problems.

"There's been, I'm assuming, some type of injury issues.

"But all in all, I can't believe that he seems so lost right now compared to what we saw when he was on top of the world."

Eight-time Grand Slam champion Andre Agassi was added to the team in Paris, although the American was only present for the first three rounds because of prior engagements elsewhere.

"Don't put Andre in the midst of this," Djokovic said. "This final set, of course, that's all me.

"His influence and impact on my game, it's going to take time.

"It's not something that comes out in the first week. We have spent seven days together. We just got to know each other."

The Serb's next scheduled tournament is Wimbledon, which starts on 3 July, and he generally does not play a grass-court warm-up event, but has not ruled out taking a break.

"Trust me, I'm thinking about many things, especially in the last couple months," Djokovic said.

"I'm just trying to sense what's the best thing for me now.

"Obviously, it's not an easy decision to make, but I will see how I feel after Roland Garros and then decide what to do next."