Spain's Rafael Nadal made history by winning a record 10th French Open title with victory over Stan Wawrinka in the Paris final.

He becomes the first man or woman in the Open era to have won a Grand Slam tournament 10 times.

Wawrinka, 32, was beaten in a major final for the first time after winning his first three.

Nadal moves above Pete Sampras on the list of all-time Grand Slam winners into second place behind Roger Federer, who beat the Spaniard to win his 18th at the Australian Open in January.

Only Australia's Margaret Court has more victories at a single Grand Slam tournament, with 11 Australian Open wins between 1960 and 1973.

The Open era, when the Grand Slam tournaments allowed professional players to compete with amateurs, began in 1968.

The Spaniard won the title for the loss of just 35 games over the course of seven matches, second only to six-time champion Bjorn Borg's 32 at the 1978 French Open.

He extended his record at Roland Garros to 79 wins and two losses since his first victory in 2005, the only defeats coming against Robin Soderling in 2009 and Novak Djokovic in 2015.

Martina Navratilova won Wimbledon nine times, while Roger Federer and Pete Sampras are the only post-war players among a group of six men to have won a Grand Slam seven times.

Despite a 15-3 career record against Wawrinka, and an imperious run to the final over the last two weeks, Nadal still had questions to answer heading into the final.

He responded in emphatic fashion, proving he was back to the kind of form that saw off all-comers in Paris for the best part of a decade.

Wawrinka's firepower off both forehand and backhand had seen off world number one Andy Murray in the semi-finals, but he could not dominate Nadal in the same way.

The Spaniard's relentless depth and power left Wawrinka trying for his spectacular winners from too wide and too deep, opening up the court for Nadal's forehand to deliver the decisive blows.

A scrappy start from both men in hot conditions saw Wawrinka miss the first break point in game three, and fail to earn another.

While the Swiss could not stop leaking errors, Nadal found his rhythm and began skipping around his backhand to fire off forehands, breaking serve at 4-2 and again to seal the set.

Four winners and 17 errors from Wawrinka told its own story, and he found himself 3-0 down in the second as Nadal stretched his run to seven games in a row.

Wawrinka's frustration boiled over as he smashed his racquet on the clay - snapping it over his knee for good measure - moments before losing the second set.

Another fizzing forehand winner swept Nadal through to a love break of serve at the start of the third and the nine-time champion had too much experience to let such a commanding lead slip.

The Philippe Chatrier Court crowd did their best to haul Wawrinka back into the match but Nadal was now simply unstoppable, breaking serve twice more before collapsing in joy when the Swiss netted on the second match point.

'Even the greats are crumbling at his feet'

"I don't like to use the term 'greatest of all' but it's hard not to with this guy. It's just absolutely phenomenal.

"Rafa's style of play is so effective on clay, he's lightning fast and ruthlessly tough. He's got incredible power.

"He's got all the attributes you need to just go on and on. He's in the minds of his opponents. Even the greats are crumbling at his feet on this surface. They cannot even compete with him.

"The only two times he's lost here, he's been injured. He cannot be touched on this surface. It was an incredible performance."

'Most important event in my career' - what they said

Rafael Nadal, speaking on court, said: "I play my best in all events but the feeling I have here is impossible to describe and you can't compare it.

"The nerves and adrenaline I feel on this court is impossible to compare. It's the most important event in my career."

Stan Wawrinka said: "Rafa, I have nothing to say about today. You were too good.

"You are a great example and it's always been an honour to play against you. Congratulations on your career, to you and your team." 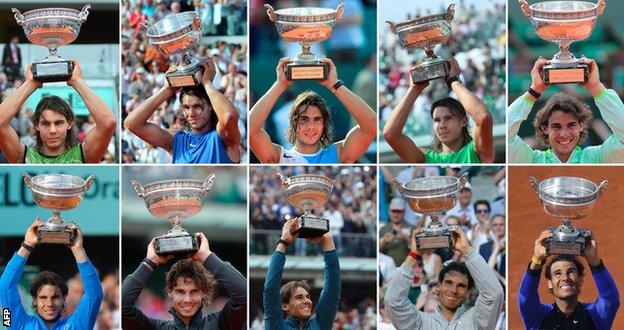