British number one Johanna Konta won only her second match in the Wimbledon main draw as she beat Chinese Taipei's Hsieh Su-Wei in the first round.

Sixth seed Konta, 26, secured a 6-2 6-2 victory against the player who beat her at the French Open in May.

She showed few signs of a back injury which forced her to pull out of her Eastbourne semi-final last week.

Konta will face Croatia's Donna Vekic, who beat her in the Nottingham Open final last month, in the second round.

Konta needed little over an hour to power past Hsieh, breaking the world number 113's serve five times in a routine win.

"I'm very happy to come through that. She is a tricky player on any surface," said Konta.

"She beat me at the French Open and I was looking forward to playing her again to try and beat her."

Konta is the first British woman to be ranked in the top 10 at Wimbledon since 1984, raising hopes she can become the first home player to win the ladies' singles title since Virginia Wade in 1977.

Konta's form on the grass has been largely positive this year - she reached the Nottingham Open final, and made the last four at Eastbourne last week.

But between those two tournaments she struggled in a heavy defeat by American Coco Vandeweghe in Birmingham.

There had been doubts about her fitness after her heavy fall in Eastbourne, but she came through a practice session on Sunday and had no problems with her movement or power on Monday.

With a wide-open draw missing the pregnant Serena Williams, the Briton is one of several names being talked up as a contender.

However, she had won only one main-draw match at the All England Club, beating Monica Puig before losing in last year's second round to 2014 finalist Eugenie Bouchard. 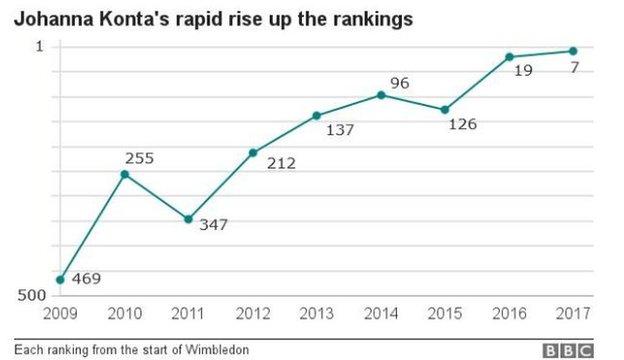 After missing two break points in the opening game, Konta punished Hsieh's serve in the third game but showed a brief moment of nerves when she allowed the Taiwanese player to fight back from 40-0 to level.

Konta put that behind her quickly, taking Hsieh's serve again in the next game and then going a double break up at 5-3.

She served out the opening set in style, stooping for a cross-court forehand winner that clinched the set in little over half an hour.

Konta raced through the second set as she moved a double break up to lead 5-1, missing two match points before serving out an easy victory with an ace down the middle.

"It is massive compliment that the fans have expectations that I can do well," she told BBC Sport.

"I'm working hard to be performing at my best level and I'm aiming to be here for the full fortnight."

"It was a very business-like performance from Johanna Konta and her team will be pleased with that.

"Konta was fairly consistent and that will come together more as she goes through the tournament.

"She served well, had a very good second serve, her backhand was rock solid.

"All in all I thought it was a very good performance."