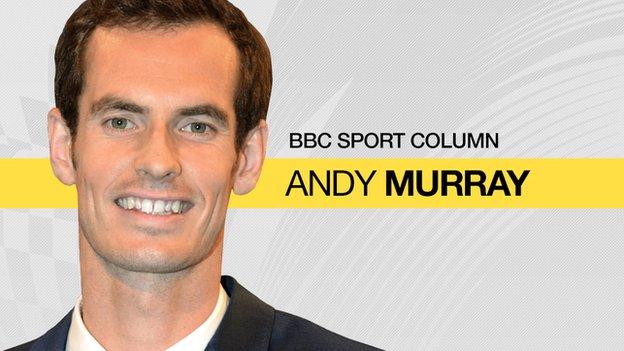 It's lucky I don't mind an ice bath because I've been having one before bed every night just to make sure I'm fit and ready for Wimbledon.

There have been a few changes to my routine since my hip started feeling sore last week but thankfully they seem to have done the trick.

My team have given me a few different exercises to do during the day when we're together, and also at home in the evening.

That means two freezing cold dips a day - one at Wimbledon and one in my ice bath at home before bed.

It might not be everyone's ideal preparation for a good night's sleep, but fortunately I've got used to plunging myself into ice-cold water over the years and I don't mind it, I'm OK.

'I can't compete at Wimbledon if I feel like that'

I've had a sore hip for a long time off and on, since I was 22 or 23, so it's nothing new for me, but a couple of days after I played Stan Wawrinka at the French Open it felt pretty sore.

That's no great surprise after a match like that, but each day I was practising on the grass it wasn't really feeling better, it was getting worse.

Obviously I then didn't play particularly well at Queen's, losing in the first round.

I wasn't feeling great, went back to practising and I was like, 'Guys, I can't keep doing this. I need to take a few days' break because it's getting worse and it's affecting how I'm playing and performing in practice. I can't compete at Wimbledon if I feel like that.'

We just decided to take a few days to look after it, get it treated and give me the best chance to be fit for Wimbledon.

I feel much better, it was a good decision. It's lucky we made it when we did on Tuesday morning. If I'd waited and practised again on Wednesday or Thursday, it would have been a big mistake, so the timing actually worked out pretty well.

'I've never had that happen during a match'

Alexander Bublik was a new opponent for me in my first-round match, and not an easy guy to play, because he really goes for it. He's definitely a bit different.

I've played well over 600 matches and I don't remember ever discussing a match with my opponent while it's still going on, but that's what happened during the rain delay.

When I beat Jarkko Nieminen in 2010, we met the Queen afterwards as she was visiting Wimbledon, and while Jarkko and I were waiting together we chatted a bit about the match.

And when I beat Jurgen Melzer at the US Open in 2008, we passed each other after showering and he initiated a chat about the match.

But that's it, as far as I can remember. I've never had that happen during a match, and it's pretty rare for it to happen soon after as well. Maybe sometimes a few weeks later but not mid-match.

I asked Bublik what he thought of Centre Court and whether he liked the grass, and we even discussed how many double faults he'd served.

He's a fun guy and entertaining, which is good for the game.

'Dustin Brown will be a different test'

I left home at about 7.50am on Monday morning and drove myself to Wimbledon for about 8.30am.

It's something I've done so many times before, both during the Championships and throughout the rest of the year, that it feels completely normal.

Obviously there were a few more nerves heading into the start of Wimbledon but I try not to do anything different on the Sunday night.

I just try to get home nice and early and relax, watch a bit of TV, do my exercises, maybe look at some videos and try to learn a little bit more about my opponent, and think a little bit about the match before bed.

Now I'm into the tournament I can get into the rhythm of matchday, practice day. Next up is Dustin Brown and on Tuesday I'll work on some of the things I might need to use against him.

That will be a different test because although he is also unpredictable, Dustin serve-volleys pretty much every first and second serve on grass courts, comes in behind returns and gets into the net a lot.

I'll need to pass well, so will work on that as well as my lobs.

It should be a good match to watch but although I get on well with Dustin, and he's a great guy, I doubt we'll be stopping halfway through to discuss how it's going.