Rafael Nadal's hopes of winning a third Wimbledon title are over for another year after an epic five-set defeat by 16th seed Gilles Muller of Luxembourg.

It ended the Spaniard's bid to win back-to-back French Open and Wimbledon titles for a joint-record third time.

"That was tough," said Muller, who has reached his first Grand Slam quarter-final since the 2008 US Open.

Even world number two Nadal's trademark competitiveness could not see off Muller in a gripping final set which took two and a quarter hours - more than half an hour longer than Roger Federer's win over Bulgarian 13th seed Grigor Dimitrov.

Novak Djokovic's match against unseeded Frenchman Adrian Mannarino, scheduled as the third match on Court One, was postponed until Tuesday as a result.

"Why didn't they put the Djokovic match on Centre Court? It was a golden opportunity to put a three-time champion there - the crowd would have loved that," he told BBC Sport.

"You can't say the people on Court One didn't get their money's worth. It would have got everybody from Henman Hill running in."

The All England Lawn Tennis Club said moving the match from Court One would have created a "significant safety issue" because there were still 30,000 spectators inside the ground at 20:30 BST.

Both Nadal and Muller received a standing ovation and rapturous applause after the longest - and arguably finest - match of this year's tournament.

Nadal's mental resilience and physical endurance has long been lauded, but the cool-headed Muller impressively refused to buckle as he finally claimed his fifth match point over an hour and a half after missing his first.

Nadal served out nine games to stay in the contest as the pair exchanged 32 holds in a gripping finale.

A tense climax saw the Spaniard save two match points to level at 5-5 and miss four break points of his own at 9-9.

Still the drama continued as Muller failed to convert two more match points at 10-9, until he eventually completed the best win of his career. 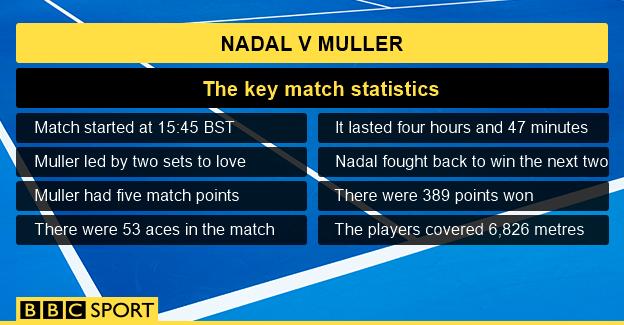 Nadal, 31, was considered one of the favourites to win the men's title after an excellent year in which he has reached the Australian Open final, losing to Roger Federer, and earned a record 10th triumph at Roland Garros.

The left-hander's success had stalled in recent years because of wrist problems, dropping as low as 10th in the world and not reaching a Slam final in almost three years before Melbourne in January.

He has looked close to his imperious best over the past few months, climbing back up to second in the rankings as a result.

However, this defeat means he has not reached the Wimbledon quarter-finals since losing in the 2011 final.

Nadal had not dropped a set in his opening three matches in SW19, but Muller represented a much tougher challenge than his previous opponents.

"It was not my best match against a very uncomfortable opponent," said Nadal, who won the Wimbledon title in 2008 and 2010.

"Well done to him. He played great, especially in the fifth set, but I fought to the last ball."

Veteran Muller is enjoying a renaissance in the latter stage of his career, finding his best form of a 16-year professional stint.

He had never won an ATP Tour title until beating Britain's Dan Evans in the Sydney final earlier this year, then going on to earn his first grass-court success at s-Hertogenbosch in the Netherlands last month.

Muller has won more grass-court matches than any other man this year, recording his 11th win on the surface by beating Nadal.

Unsurprisingly he looked full of confidence as he dominated the opening two sets, with Nadal struggling to read the tall left-hander's serve.

However, momentum swung in the Spaniard's favour as he upped his returning speeds in a third set in which he cracked 11 winners.

Nadal continued to press Muller back and only a single break of serve again decided the fourth set.

Both men struggled to find another break point until the 10th game of a tense final set, Muller eventually keeping his composure 18 games later to end a 22-match losing streak against a top-five player.

"I didn't feel like I was playing bad in the third and fourth sets so told myself to keep it up and if it doesn't happen then he is just too good," he said.

"I started serving better and in the end it was just a matter of a few points here and there."

'Most would give in against Nadal' - analysis

Nadal was playing great leading up to tournament - unbelievable on clay and great at Wimbledon.

Muller's serve is awesome, he's got sweet hands and stays back more but the biggest surprise was how fit he was late in that match.

At 13-13, taking it to Nadal, who is the fittest, toughest and most energised person. No-one has tried harder on a tennis court.

Muller dropped four match points, but still managed it. Most mortals would say "I give in" against a man who wants it so much.