The Swiss third seed won 6-3 6-1 6-4 as seventh seed Cilic struggled with a blister on his left foot and broke down in tears during the second set.

Federer, 35, finished the contest in one hour and 41 minutes to claim his first Wimbledon title since 2012.

He becomes the oldest man in the Open era to win at the All England Club.

"It is cruel sometimes," Federer said of Cilic's physical difficulties.

"But Marin fought well and is a hero, so congratulations on a wonderful tournament."

Federer surpasses Pete Sampras and William Renshaw, who won their seventh titles in 2000 and 1889 respectively, with only Martina Navratilova still ahead in terms of Wimbledon singles titles on nine.

He has won two of the three Grand Slam titles so far this year, having returned from a six-month break to win the Australian Open in January.

With 19 major titles he extends his lead over Rafael Nadal in the men's game to four, and now stands joint-fourth on the all-time list with Helen Wills Moody, five behind Margaret Court on 24.

'I never give up in a match'

Among his long list of achievements, Federer became the first man since Bjorn Borg in 1976 to win the Wimbledon title without dropping a set.

The tournament favourite from the outset, he was rarely troubled over the course of seven matches, and Cilic was not in the condition to provide a serious test.

"I never give up in a match. I gave it my best - it's all I can do," Cilic said afterwards.

Federer was playing in his 11th Wimbledon final and Cilic his first, and the gap in experience showed from the early stages.

Cilic, 28, hit a forehand which bounced before the net on the opening point as the nerves appeared hard to shake off.

Federer offered up a couple of early double faults but there was a sense of inevitability about the first break, which came in game five after Cilic fell heavily chasing down a drop shot, and then sent a backhand into the net.

A beautiful cross-court forehand helped Federer towards set point in game nine and Cilic duly double-faulted, ending the set with a 49% first-serve percentage that hardly troubled the Swiss.

After Federer made it 3-0 in the second set, a tearful Cilic sat in his chair as the doctor, tournament referee and supervisor attended to him.

'It's a wonderful moment for the family'

Cilic later revealed that it was emotional rather than physical pain at that stage, but he was clearly in some distress and there was little he could do to stop Federer racing into a two-set lead after just 61 minutes.

A medical time-out was taken before the start of the third set and this time strapping and padding applied to Cilic's left foot.

A first retirement in a men's singles final since 1911 appeared likely but Cilic struggled on, while Federer probed for the break that would surely end his wait for a Wimbledon title.

It came at 3-3, when Cilic netted a backhand and successive forehands, and only the dark clouds above Centre Court appeared capable of delaying Federer's coronation.

Fourteen years on from his first victory, there were signs of nerves when he served for the title for the first time since 2012.

A first championship point disappeared with a wayward forehand, but an ace down the middle followed and it was the celebrating Swiss who was now tearful as he looked to his team and family, including wife Mirka and four children, in the stands.

"I think the younger twins think this is a nice view and a nice playground - hopefully one day they'll understand," added Federer.

"They come for the finals. It's a wonderful moment for the family and my team.

"This one is for us. Thank you to Wimbledon, thank you Switzerland."

Boris Becker, three-time Wimbledon champion: "We can't emphasise enough all the records Federer has broken, and with tough competition.

"Everybody is younger than him and he finds the way to win easily, and do it consistently on every surface, apart from clay. It's just impossible to fathom. You think, where is he going to go now? Will it be 20 Grand Slams at the US Open?"

Tim Henman, four-time Wimbledon semi-finalist: "Because Federer makes it look so easy and the technique is effortless, people take for granted the training that he does. He's meticulous and at the age of 35 he knows what works for him.

"I've seen him in the locker room doing all the exercises for his lower back, which he can struggle with. He can struggle with his shoulder as well. I think fundamentally he loves what he does. This is his hobby, not his job. If it stays that way, there's no reason why he can't keep playing." 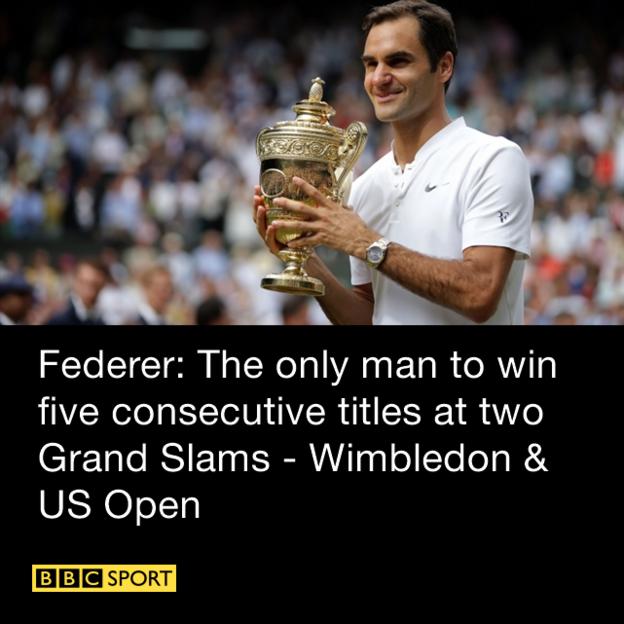