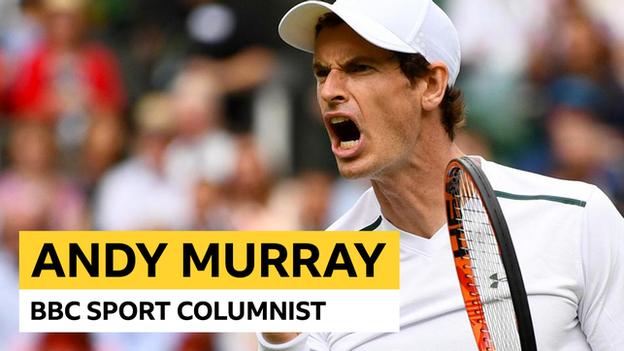 Three-time Grand Slam champion Andy Murray is set to make his competitive return to action at Queen's Club this week after almost a year out with a hip injury.

The 31-year-old Briton talks about the decision to have surgery in January, and his recovery, in his regular BBC Sport column.

Moving towards the start line now feels great and I'm really looking forward to playing again. There have been times where I have been practising on the court and not managed to get to the start line.

With sport you play to win but when you are away from something you love doing for almost a year you realise you're playing because you love it.

I didn't start playing to win Wimbledon or get to number one in the world. I never believed that was something I was going to do or something I thought about when I was a kid growing up.

I played tennis because I loved it and continued doing that throughout my whole career.

Of course pressure comes as you get older and start to do better but when you step away from the sport for a long time then you look at things a little bit differently.

I posted a message on my Instagram page just before the surgery - that was a tough time for me.

A lot of things get written and you don't always have the opportunity to respond to what has been said.

When, after six months of not competing, you're still not good enough to be where you want to be and looking like you're going to have to have surgery, it's the lowest point you can get to in your professional career.

People might say, "oh, you've got it great" - which I'm aware that we do and I'm very lucky I get to play tennis for a living.

But that's what I've been doing since I was a child, and when you're not able to do something that you love it's tough.

That was why I posted on Instagram, because at the time I was getting asked lots of questions and I didn't have all of the answers. 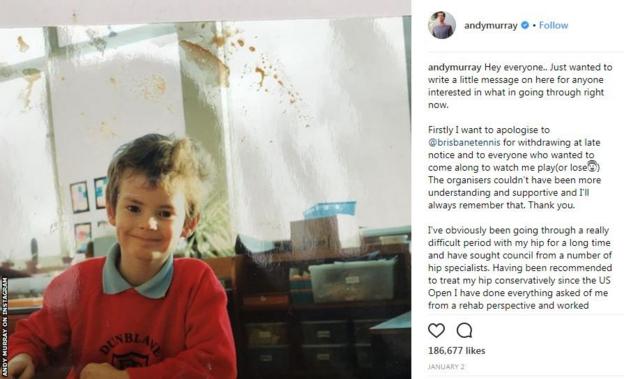 Surgery was the only option

It had been six months since I last played, in the quarter-final at Wimbledon, but I wouldn't say I gave the hip a fair chance to fully recover until after the US Open.

I was trying to play the US Open at the end of August, which I said at the time was probably a mistake, but after that I did pretty much everything that was recommended by doctors.

I love playing tennis. I miss it a lot

I was rehabbing, trying to get stronger, not spending much time on the court, trying to take a bit of the load off my hip and allow it to calm down. Then I tried to build up a little bit and tried to get ready for Australia.

I was doing lots of really good stuff in the gym but then I wasn't translating it on to court.

I was still feeling uncomfortable when I was on the court, and then that was when I decided I had to have the surgery.

No athlete wants to go through surgery. You want to avoid it. But it was at the stage where that was what was being recommended me and I went ahead with it.

I was surprised by the 'very little' pain

Surgeries can go wrong but I've never had the mindset - like when I had back surgery - that it was going to go badly.

I thought this is going to go well.

I'd been in pain for quite a long time. With my hip it had been six months but I had been in a bit of discomfort for quite a few years before that as well.

I wanted to get better, I wanted to feel like my normal self again. I wasn't seeing the negative side of it.

After the operation I had very little pain actually.

Because of the way they do the surgeries now, I think it was a little different to before when they had to cut you open to do it.

The scars are very, very small and I wasn't in much pain but also I wasn't allowed to do a whole lot. I was on crutches for two days and after that got rid of the crutches and started to move around a bit - slowly.

That was something that surprised me, I was expecting to be in a lot more pain after the surgery from what I'd heard but I was back up and walking after 48 or 72 hours.

That's why the recovery from a lot of hip surgeries are a bit faster now because before it was crutches for four to six weeks.

That means you have a lot of muscle wastage so it then takes time to build that back up before you can start training properly again.

Whereas with this I was back on the bike after 10 days, doing some exercise, and that feels good.

After surgery in Melbourne, my mum was there and my team, so I was in the house watching the Australian Open, not doing a whole lot.

When I got back home, it didn't really affect my family life too much. I was trying not to be on my feet for hours and hours a day, but there were no restrictions in terms of walking around.

I'd like to tell you I watched lots of box sets to get me through the long hours, but that wasn't really the case.

When I got back the rehab started. Spending six to eight hours a day rehabbing. And it is boring, not a whole lot of fun.

Because I was also doing that before the surgery it had been like the best part of nine months that I had been doing that stuff, so it's frustrating and tiring at times.

But the thing that keeps you going is that I love playing tennis. I miss it a lot. That's why I've been doing everything to try and and get back playing again.

The support I have received has also been amazing and I'm thankful for all the messages, it makes going through everything that bit easier.

While I'll be nervous, it will be great to finally step back on the court.