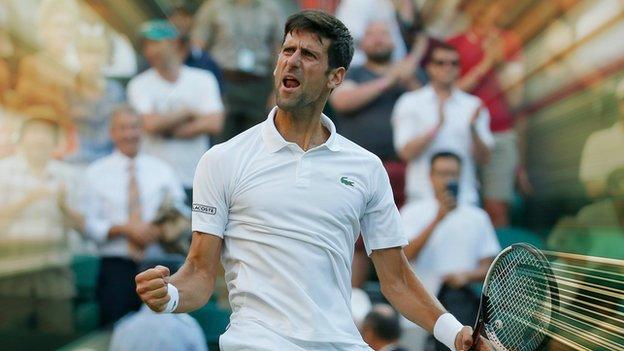 Two years ago at Wimbledon, Novak Djokovic entered the interview room crestfallen - the champion had just been dumped out at the third-round stage by Sam Querrey and was about to make a candid confession.

"It's not an injury. It was some other things that I was going through privately," he said. "I am in a position, like everybody else, like all of you, we all have private issues and things that are more challenges than issues, more things that we have to encounter and overcome in order to evolve as a human being."

It was revelatory to some. Commentators, including tennis great John McEnroe, suggested the 31-year-old was having "off-court issues with the family".

There followed further losses in major finals, the elbow injury - and subsequent surgery - that sidelined him from July 2017 until January. There were coaching changes, with Boris Becker, then Andre Agassi and Radek Stepanek, leaving the posse.

The former number one, who had held all four Grand Slams in May 2016, came into this championship as the world number 21 and with only three Tour wins in almost two years. Despite reaching the last eight at Roland Garros and a Queen's final, how he would perform at SW19 was anybody guess.

However, the characteristic staying power in rallies and that incredible return game were on show against big servers Kyle Edmund and Karen Khachanov, which has led some to tentatively suggest the "old Djokovic" is back.

Djokovic's mindset was 'too negative'

Becker and the Serb had a good relationship and it remains so.

During their three years together until they parted company in December 2016, Djokovic won six Slams. Yet the German three-time Wimbledon champion said at the time it had been a "challenging" six months prior to the split.

In a revealing interview this week, Becker told BBC Sport about the man he knows better than most.

"When I first got together with Novak [in 2013] I was impressed with how much he wanted it and how much he thrived on being the best," said the 50-year-old.

"We all know about his conditioning - the yoga, healthy eating - but I felt his mindset was too negative. Nobody knows 100% why it was negative, and why he was frustrated after matches he lost."

Becker said it took Djokovic six months to overcome his "inner demons" before success came with 25 ATP titles in total during their period together.

However, the hold he had at the top of men's game began to loosen. It began with the loss to Querrey, then came disappointment of a first-round defeat by Juan Martin del Potro at the Rio Olympics disappointment.

After that came defeat by Stanislas Wawrinka in the US Open final and another at the hands of Andy Murray in the ATP Finals, which resulted in the Scot keeping the number one status he had taken from the Serb.

Since his return to tennis in January, it has has been a gradual journey back to the familiar Djokovic.

He reached the quarter-finals at Roland Garros, but was then defeated by Italy's Marco Cecchinato, who had previously not won a main-draw match at a Slam. Arguably, the Serb's best performance of the season came last month at Queen's where he was a match point away from beating world number three Marin Cilic.

With another stiff test in Japan's Kei Nishikori awaiting him in Wednesday's Wimbledon quarter-final, is Djokovic in the form to add to his 12 Grand Slam titles?

"Once you've been at the mountain top, if you are not past a certain age, you always have it in you," Becker added.

"It's about how willing you are to get there. He's recommitted himself to do whatever it takes. It's taken him a couple of tournaments and coaching changes. I'm glad he's back with [former coach] Marian Vajda - he was important to him when I was working with him as well."

Djokovic's wife Jelena has again been an ever-present at Wimbledon, and the player reiterated her importance to him in a recent emotional Instagram post.

Becker continued: "I think Novak's in a happy place again.

"You don't know from the outside what's really going on in the bedroom. But he's got two kids now - that was always his foundation. He wants his family to be happy first, then focus on his passion.

"It's a warning sign for other players that he's back to where he should be in order to challenge Grand Slams."

Novak could beat both Roger Federer and Rafael Nadal. From what I have seen in the past few days, he looks to be playing really, really well.

He has not been in the latter stages of events recently. Queen's was his first final and it looked as if he had doubts, but I think his level is back to where he wants to be and mentally is where he needs to be.

Novak has got a great shot.