Serena Williams says she still has a "really long way to go" to win a record-equalling 24th Grand Slam singles title at the US Open.

Williams plays Anastasija Sevastova in the semi-finals on Thursday and is the only major winner left in the draw.

A seventh US Open title would see the American equal Margaret Court's Grand Slam haul but Williams has lost her last two semi-finals in New York.

"I'd been a couple of steps away at the last Grand Slam, so I'm definitely not ahead of myself," Williams said.

"I still know that no matter whether I'm in the semi-finals or the finals, I have a really long way to go to win." 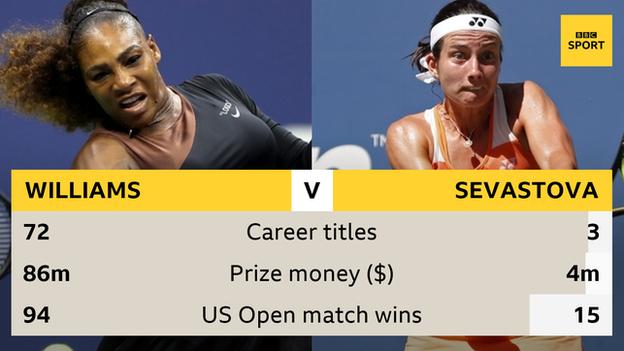 Williams is also aiming for a first Grand Slam title since giving birth to her daughter last year.

The semi-final, which starts at starts 0:00 BST on Friday, is Sevastova's first in a Grand Slam semi-final and comes after her win over defending champion Sloane Stephens in the quarter-finals.

Sevastova retired from the sport in 2013 because of recurring injuries and spent two years studying leisure management before returning in 2015.

"It was an amazing journey, this three, four years," the world number 18 said. "After I stop, at some point I will look at it and I will be proud of myself, for sure.

"I hope I will enjoy it, playing semi-finals. It's not every day you play semi-finals of a Grand Slam."

Back to 'business' for Osaka

Osaka, who has long been tipped as a future star of the women's game, is the first Japanese woman to reach the last four of a Grand Slam for 22 years.

"It means a lot but I was much more emotional for the quarters and now I feel like it's sort of business again," the 20-year-old said.

"Quarters was my mental goal, every time I played a Grand Slam.

"And then after I went into the quarters, I want to keep going, so I feel like I have to be focused again and keep trying really hard."