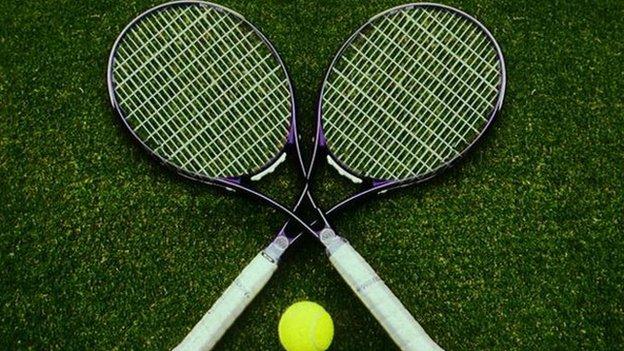 Law enforcement officials in Spain have arrested 15 people in an investigation into tennis match-fixing by an Armenian criminal gang.

Spain's Civil Guard said 83 people were implicated, among them 28 players from the ITF Futures and Challenger tours.

One of those arrested is Spanish tennis player Marc Fornell-Mestres, 36.

He was ranked 1007th in singles at the end of 2018 and was suspended by the Tennis Integrity Unit last month as part of an anti-corruption probe.

Spain Civil Guard also said one of the players implicated in the investigation competed at last year's US Open.

It added that more than 50 electronic devices, credit cards, five luxury vehicles and documentation related to the case were also seized.

Europol earlier said on Thursday that 83 people had been arrested by the Civil Guard, but the Spanish authorities later clarified the situation.

"The suspects bribed professional players to guarantee predetermined results and used the identities of thousands of citizens to bet on the pre-arranged games," Europol said in a statement.

"A criminal group of Armenian individuals used a professional tennis player, who acted as the link between the gang and the rest of the criminal group.

The Civil Guard added that "once they got the bribe, the Armenian members went to the places where the matches were being played to make sure the player went through with what they had agreed, making the most of their imposing size".

"Fifteen people have been detained, among them the leaders of the organisation, and 68 others have been investigated."

None of those investigated has been named.

The Civil Guard said the organisation had been operating since at least February 2017, while Europol said at least 97 ITF Futures and Challenger matches had been fixed.

The investigation started in 2017 after the Tennis Integrity Unit (TIU) grew concerned about "irregular activities" relating to pre-arranged matches in the tournaments, Europol added.

Last month a final report into corruption in tennis by the Independent Review Panel said there should be no live streaming, or scoring data provided, at the lowest tier of professional tennis.

The ITF Futures and Challenger tournaments are below the top-tier ATP and WTA Tours.

The International Tennis Federation estimates there are 14,000 players trying to make a living from the sport, half of whom do not make any money at all.