The Scot, 32, thought he might not play again before having his hip resurfaced in January but is now "pain free".

Lopez, 37, added the doubles to the singles title he won earlier on Sunday.

Left-hander Lopez, who beat France's Gilles Simon in three sets, is the first man since Australia's Mark Philippoussis in 1997 to win both the singles and doubles titles at Queen's in the same year.

Murray, who had not won a doubles title since 2011, described ending his comeback tournament with victory as "brilliant".

"I've enjoyed it, I felt very relaxed at the beginning of the week, then I started getting more nervous as the week continued and my competitive instincts were kicking in," he said.

To loud cheers from the crowd, he added: "My hip felt great, there was no pain."

Lopez said he never expected to win both the singles and doubles titles.

"It happens maybe once in a lifetime, with how difficult it is to win the singles, I cannot believe I won both," he told BBC Sport.

Former world number one Murray could not have dreamed for a smoother return to the sport which he thought he might have to quit this summer because of chronic hip pain that had not been cured by previous surgery.

Five months ago he broke into tears during a news conference at the Australian Open when he laid bare the extent of his fears about an injury that had left him unable to put on his shoes and socks without pain.

That was a stark contrast to the beaming grin stretched across his face at Queen's, when he and Lopez sealed victory with their second of five match points.

When a return from Salisbury sailed wide, Murray leapt into the air in celebration as almost all of the centre court crowd also rose to their feet to mark a victory many probably thought they would not see.

During his return to action this week, Murray has shown a sharpness which has surprised many.

The three-time Grand Slam champion's shot-making, less surprisingly, has not diminished and neither has the fierce will-to-win.

This was exemplified in the first set tie-break, which came after Murray and Lopez had saved a set point at 5-4 down.

A brutal first serve down the middle from the Scot was hit long and followed up by a sharp, trademark cry of "Let's go!" for a set point of their own.

That was claimed when Ram guided a volley wide - putting Murray and Lopez, who had not played together before this week, halfway to an extraordinary triumph. 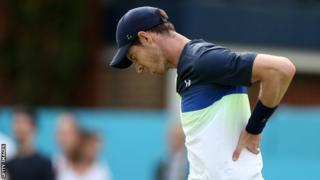 Murray returned after almost a year out with a hip injury at Queen's in 2018. His comeback ended in a narrow defeat by Nick Kyrgios in the singles, but the Scot was visibly struggling with back pain

Murray and Lopez's success was made even more extraordinary by the exertions of the 37-year-old Spaniard.

After needing two hours and 49 minutes to see off Simon in the singles final, it meant he had spent almost eight hours on court over the previous 24 hours by the time they faced Salisbury and Ram.

Lopez put in a five-hour stint on Saturday when his singles semi-final win over Canadian teenager Felix Auger-Aliassime, which he only started shortly after 16:00 BST, was followed by two doubles matches with Murray.

The pair only needed 13 minutes to wrap up victory over Dan Evans and Ken Skupski in the conclusion of their quarter-final and then beat third seeds Henri Kontinen and John Peers, with the Spaniard finally finishing for the day at nearly 21:00 BST.

The left-hander returned to court with Murray little over an hour after lifting the singles trophy.

During two changeovers in the first set, Lopez stayed on his feet as he seemingly looked to manage a back problem.

Yet it was the Spaniard who somehow mustered the energy to turn the final-set champions tie-break in their favour.

Another forehand winner left Murray serving for the match.

The first of their five match points was saved when Ram finally beat Murray with a forehand winner down the line.

But a wide forehand from Salisbury handed them a victory that meant Lopez became the first player since Australian Mark Philippoussis in 1997 to win the singles and doubles titles here.

"I'm so happy to have this man playing with me," Lopez said. "We're so happy that you're back on a tennis court."

Lopez frequently stayed on his feet at the change of ends: wary of the pounding his 37-year-old legs had taken over 15 hours on court.

Having won a third-set tie-break to beat Gilles Simon in the singles final, he hit five winners in a row to turn the deciding 10-point tie-break out of Joe Salisbury and Rajeev Ram's reach.

Murray has looked in terrific shape all week, and his desire to win as strong as ever: he says he got more nervous as the week progressed, and the prize loomed larger.

He now heads to Eastbourne in search of more success with a different partner - the Brazilian Marcelo Melo.

381 comments
Back to top
unknown