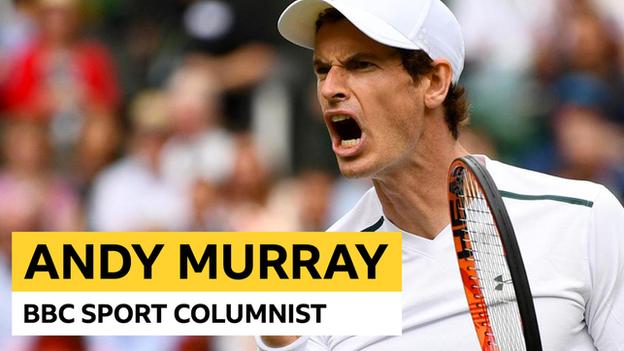 In his regular BBC Sport column, Andy Murray discusses if he will return to playing singles, winning the Queen's doubles with Feliciano Lopez, continuing his comeback at Eastbourne this week with Brazilian Marcelo Melo and hugs from former Chelsea and Manchester United football manager Jose Mourinho.

By winning the doubles at Queen's, it is quite easy to get carried away in these moments and excited with what has happened.

I still haven't given much thought to when exactly I could come back in the singles.

I know how my body has felt after the matches over the past few days and, although I've had no pain in my hip, I've still been sore and a bit stiff.

That's because my body needs to adapt to the new hip and the new movements, the stresses and strains I'm putting on it.

So I know I need to respect that process.

I'm not going to rush this and I've no interest in doing that.

I'm perfectly happy doing what I have done in the past week at Queen's.

If my body continues to feel good and keeps progressing then I would like to try to and play singles.

But if it doesn't - and I get to a point where I'm playing and practising singles, and think I'm not quick enough or able to compete at a level I'm happy with - then continuing playing doubles is maybe something I'd consider.

I've said since my operation I ultimately would like to return to playing singles, but honestly I don't mind either way.

If a return to singles happens in September, or next year, I genuinely don't mind.

After Wimbledon I think I will have a couple of options.

I could start practising for singles through the US Open swing, while I continue playing doubles and then try to maybe play singles after that.

Or maybe I will take a month or six weeks off after Wimbledon to get myself ready for singles. Then I might be able to play singles close to the US Open.

But getting to the US Open this year and being competitive isn't the target.

'You have to be less selfish as a doubles player!'

So after winning Queen's, I'm going down to Eastbourne to play in the doubles alongside Marcelo Melo.

I think he'd heard I might play in Eastbourne and he wasn't going to play that week with his regular partner Lukasz Kubot.

They played the first two weeks on the grass and then he was thinking, maybe, of going back to Brazil.

But he decided he wanted to play in Eastbourne and asked me if I would like to play.

I said 'yes, of course'. He's a good partner, having been the doubles world number one and won Grand Slam titles, and he is someone I get on with. So that was it.

With certain people you know you're going to have some chemistry.

I've spent time with Feli for the last 14 years on the tour and we've got on well with each other, so it was a natural fit.

Because of how much tennis Feli had been playing this week, with him also winning the singles title at Queen's, you feel like you have to gee him up and keep trying to give him as much energy and help as you can.

Also, with Feli and because of how well he serves, when I'm serving he might think 'Oh Andy, come on serve better!'

And when I'm returning it'd be easy if he missed a return to think 'Oh you should have made that'.

But no tennis player, or doubles partner, has everything and it's about being able to complement each other and work together around your strengths.

You need to come up with a winning strategy and winning tennis - thankfully Feli and I did that at Queen's.

But it is a challenge mentally and very different to singles.

Basically you have to be less selfish as a doubles player!

That's a good thing for me and something you have to continually learn, which I hope to do with Marcelo this week.

A big hug and no words - 'man management' from Mourinho

On Saturday I met up again with Jose Mourinho on the practice courts at Queen's.

One of the times I met him - and for me this was very interesting - was after I lost to Roger Federer at the ATP World Tour Finals at the O2 Arena in 2014.

When I was walking back to my locker room from the court I saw Jose, and he just came up to me and hugged me.

It was nice because often in those situations people try to find words and nothing really works.

He didn't have to speak because I got the feeling he felt for me that night and he wanted to show that.

So it was great to see him again at Queen's and I always enjoy chatting to him, especially about football.