Wimbledon - a feature of the British summer as essential as barbecues in the rain and ice creams on the beach.

Players all in white on luscious green grass courts and spectators perched on a hill snacking on strawberries is a comforting and familiar sight when July comes around.

But all is not quite the same at SW19 this year. Here, BBC Sport takes a look at what's changed at the All England Club.

Andy Murray, but not as we know him

Many thought Andy Murray had played his last competitive tennis match when he outlined retirement plans in a tearful news conference at the Australian Open in January.

But one hip surgery later and the two-time Wimbledon champion was back to winning ways in the Queen's doubles on Sunday.

After missing last year's Wimbledon, Murray is back but the big difference is he will be playing doubles rather than singles.

The Brit is partnering France's Pierre-Hugues Herbert, who has won the doubles title at every Grand Slam. Good choice Andy!

A covered Court One

Rain is like kryptonite for tennis tournaments, but Wimbledon now has a roof over Court One.

That means play can continue on there as well as on Centre Court until 23:00 BST whatever the weather.

The roof got its first taste of the limelight when it was unveiled back in May. Handily, it was a rainy day so the roof was put to work immediately. 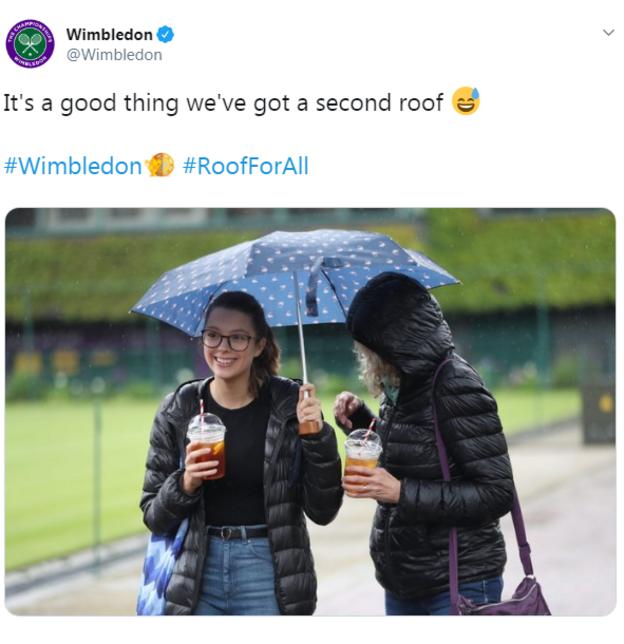 Play may be able to continue later on Court One, but there will not be any more marathon matches because a tie-break in the final set will be introduced at Wimbledon this year.

Previously, players had to win by two games in the last set but if that hasn't happened by the time the score gets to 12-12 then a tie-break will be played. Never again will we see anything like the 11 hour and five minute-long match between John Isner and Nicolas Mahut on the SW19 grass.

The first player to seven points wins the tie-break, but they have to win by two points so it could still last quite a while...

There is no shortage of greenery on show at the All England Club and now the tournament will be more sustainable, too.

Water bottles will be fully recyclable and made from 100% recycled material while 4,500 fewer plastic bags will be used as they have been removed from the racquet stringing process.

Fans will get more tennis in the mornings this year because the start time has been moved ahead by 30 minutes on the outside courts, so the first matches will begin at 11:00 BST.

There's no change on Centre and Court One, though, where play will still start at 13:00 BST.

A quad doubles wheelchair tennis exhibition tournament was played at Wimbledon last year and this time around there will be a competitive quad singles and doubles draw.

The two events join the men's and women's wheelchair singles and doubles competitions in the Wimbledon programme.

Of course, one thing that will surely never change is the unpredictable British weather. Tennis fans were treated to scorching weather in south-west London last year and at the moment clouds and sun are predicted for the first week. But you never know...