Teenage sensation Cori 'Coco' Gauff has the right elements to reach the top of the women's game following her sensational Wimbledon win over Venus Williams, according to two former Grand Slam champions.

Gauff, who at 15 years and 122 days became the youngest player to qualify for the main Wimbledon draw since the Open era began in 1968, swept aside the five-time winner 6-4 6-4 on Court One in front of a packed crowd including her jubilant parents.

"People have been talking about Coco for years," fellow American and two-time US Open champion Tracy Austin told BBC's Today at Wimbledon.

"They have now started to recognise her internationally. Obviously she's a tremendous athlete, but to walk on court to face Venus, a player who she idolises, there were plenty of opportunities for her to get tight and nervous.

"She has been raised for greatness and this is beginning."

"I look at the way she plays. If she's not number one in world by 20 I will be absolutely shocked."

Gauff, who started playing tennis at the age of seven, comes from a sporting family. She is coached by her father Corey, who played basketball at Georgia State University. Her mother Candi was a gymnast before moving into track and field.

Their daughter began to deliver in major arenas two years ago when she became the youngest US Open girls singles finalist - aged just 13. And last year she won the French Open equivalent only two months after her 14th birthday.

Wimbledon qualifying was a target for Gauff this year, but her ranking of 301 was not high enough to earn a shot. However, while she was shopping online, she found out she had received a wildcard.

In the final round of qualifying she eased to a 6-1 6-1 win over Belgium's world 129 Greet Minnen, although her preparations were not ideal having had to take a science test at 11pm the previous night.

Atlanta-born Gauff idolised both Williams sisters, Venus and Serena, so when she was drawn against the elder of the two in the first round, the focus on her grew further.

How would she perform against one of the all-time greats in such a big arena?

Gauff settled into the match early, breaking to go 3-2 up in the first set then crucially breaking for 5-4 in the second before serving out for victory against a player who had already won four Grand Slams before she was born.

"I literally got my dream draw, so I'm just super happy I was able to pull it out," she said in her post-match news conference.

"She played amazing, was just super nice. She's always been nice the couple times I met her."

When asked about what she can achieve in the sport, the teenager said she has been given a target to "be the greatest".

"My dad told me that I could do this when I was eight," said Gauff, who is being nurtured by Serena Williams' coach Patrick Mouratoglou.

"Obviously you never believe it. I'm still, like, not 100% confident. But you have to just say things. You never know what happens."

"I think we're seeing a champion in the making here." 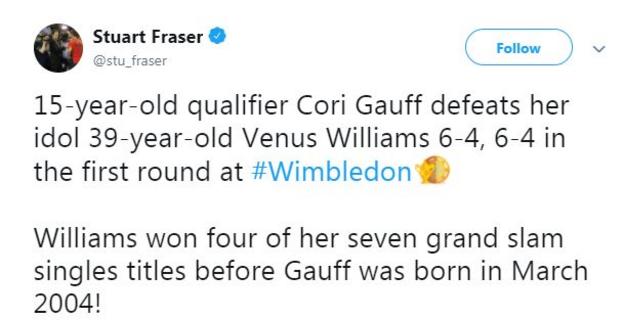 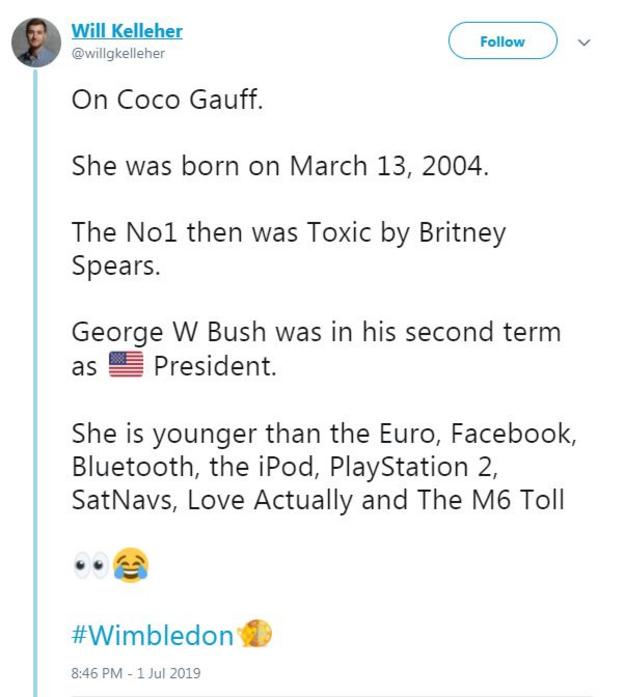