Teenager Bianca Andreescu stunned Serena Williams in a gripping US Open final to claim a first Grand Slam title and deny the American a 24th major.

Canadian 15th seed Andreescu, in the main draw here for the first time, blew a double break in the second set before taking her third match point and falling to the ground in disbelief.

"This year has been a dream come true," Andreescu told the crowd.

"I am beyond grateful and truly blessed. I've worked really hard for this moment. To play on this stage against Serena - a true legend of the sport - is amazing."

To the disappointment of a stunned home crowd on a passionate Arthur Ashe Stadium, Williams has now lost four successive major finals.

"Bianca played an unbelievable match," Williams said. "I'm so proud and happy for you, it was incredible tennis out there."

Williams, seeded eighth, looked edgy throughout as she aimed to match Australian Margaret Court's tally of all-time major wins, handing over the first three of Andreescu's five breaks of serve with double faults.

By contrast, Andreescu played with the confidence which has marked her out as a star in a stunning breakthrough year.

She is the first Canadian to win a tennis major and the first teenager to win a Grand Slam since Maria Sharapova claimed the 2006 title at Flushing Meadows.

She is the first teenager to win their maiden Slam since Russian Sharapova at Wimbledon in 2004.

Andreescu kept her nerve to take a third match point with a forehand down the line, dropping her racquet to the ground and then, after a warm hug with Williams, lying on the court with her arms spread out as she contemplated her achievement.

After returning to her feet, she used a hastily-arranged step ladder to climb into her player's box and embrace her nearest and dearest, including parents Nicu and Maria.

Before the match, Andreescu said if someone told her 12 months ago she would be facing Williams in the US Open final she would have thought they were "crazy".

Tellingly, in a sign of her unwavering confidence, she said she would not have felt the same if they told her the same thing a fortnight ago.

Twelve months ago she lost in the first round of qualifying at Flushing Meadows and was ranked outside the top 200 in the world.

But she has become the most talked-about young player on the planet following a remarkable rise this year.

Andreescu, whose Romanian parents Nicu and Maria emigrated to Canada in the 1990s, had only played six tour-level matches at the turn of the year.

Since then she has won prestigious WTA Premier titles at Indian Wells and Toronto, rising to 15th in the world as a result and raking in £1.79m of her £1.97m career prize money.

Andreescu was fearless throughout her maiden Grand Slam final and unfazed by the occasion of playing an American icon on the biggest tennis court in the world.

Although the crowd was unsurprisingly backing Williams throughout inside an incredible noisy Ashe, the manner in which Andreescu coped and reset after seeing her double break in the second set disappear was remarkable.

At one point, Andreescu even put her fingers in her ears as the volume became particularly loud as Williams fought back from 5-1 down.

After her first Championship point went begging in the seventh game, another disappeared when Williams hit an ace for 30-40 in what proved to be the final game before Andreescu sealed victory at the third attempt with a forehand winner.

"I definitely had to overcome the crowd. I knew you guys wanted Serena to win," a smiling Andreescu said in her on-court victory speech.

"Obviously it was expected for Serena to fight back, but I tried my best to block everything out. I'm glad how I managed to do that." 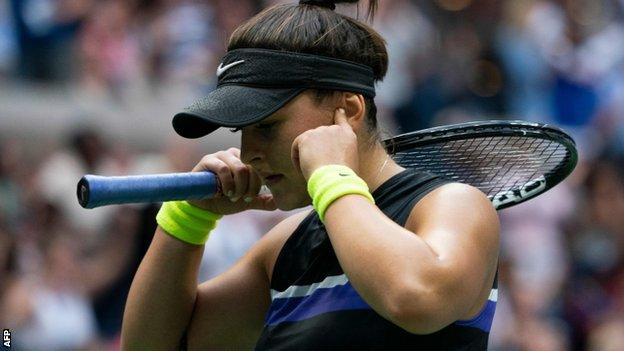 Williams fails to get over the line again

Williams said after July's defeat in the Wimbledon final against Simona Halep that the weight of history was not a burden as she aimed to clinch that record-equalling 24th Grand Slam.

Yet, after also losing last year's Wimbledon final and a controversial US Open final against Naomi Osaka 12 months ago, this latest defeat inevitably leads to more questions about why she cannot get over the line.

With time seemingly running out for the six-time US Open champion, who turns 38 this month, it makes you wonder how many more chances she will have to earn her place as the greatest ever, at least in numerical terms.

However, BBC Radio 5 Live analyst Jeff Tarango is in no doubt she will reach more Grand Slam finals.

"I think Serena will pull it together. I don't have any doubt. She's going to be back, she's not going to give up," the American said.

If Williams was looking for a comfortable start following her three previous final defeats, that did not materialise.

Nerves again seemed to take hold as she produced two double faults to gift the opening game to Andreescu, leaving her chasing a deficit which she could not recover.

It was the first break point she had faced - and lost - since the first set of her fourth-round win over Croat Petra Martic.

The confidence she showed in the routine wins over China's 18th seed Wang Qiang and Ukrainian fifth seed Elina Svitolina were not apparent as Andreescu's depth and variety, plus her ability to absorb Williams' power, unsettled the American.

Williams, who had close friend Meghan Markle, the Duchess of Sussex, sitting with her family, could not play with the control she showed against Wang and Svitolina, producing 14 unforced errors in a loose opening set.

All of her nine previous defeats in Grand Slam finals came after losing the opening sets and this miserable record did not look like changing when Andreescu started racing away with the second set.

Williams looked dejected as she continued to struggle to land a first serve, regularly looking at her racquet and shaking her hand as though she had no answers.

Suddenly she started to provide them in a spirited fightback, only for two more unforced errors to creep in to stall her momentum as Andreescu broke for a sixth time.

"I was just fighting at that point [at 5-1 down in the second set], trying to stay out there a little bit longer. The fans started cheering so hard and it made me feel better and fight a bit more," Williams said.

"Bianca played an unbelievable match. If anyone could win this, outside of [sister] Venus, I'm happy it's Bianca."

'Andreescu is the real deal' - reaction

Tennis great Billie Jean King: "Congratulations to Bianca Andreescu on winning her first major title at the #USOpen. She is Canada's first Grand Slam singles champion! The Future is now. A phenomenal effort by Serena Williams until the very end.

2019 Cincinnati Masters champion Madison Keys: "Congrats Bianca Andreescu on your first Grand Slam. So happy for you! Always a fighter, always inspiring - win or lose Serena Williams. Such a great match to watch."

Wimbledon champion Simona Halep: "Congratulations Bianca Andreescu on an amazing performance and your first Grand Slam! Romania is very proud of you."

BBC Radio 5 Live tennis commentator David Law: "Andreescu was just magnificent for the first set and a half. We ran out of superlatives to describe the way she was playing. She has presence and buckets and buckets of ability. It's remarkable to see it in a 19-year-old. She is totally unfazed by her surroundings, it would appear. That is four Grand Slam finals in a row that's Williams has not been able to win, but I don't know how much more she could have done today. Andreescu is the real deal."