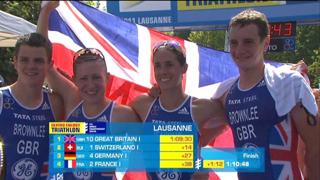 Watch the closing stages of the Team World Triathlon Championship as Alistair Brownlee storms home on the anchor leg in Switzerland to secure a 14-second win for Great Britain.

Each of the four team-members races over a 265m swim, 5km cycle and 1.2km run in the recently devised shorter format which organisers hope will be used at the 2016 Olympics in Brazil.