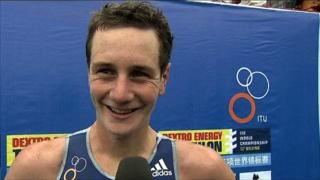 Brownlee brothers Alistair and Jonathan both have reason to celebrate after securing the top two spots in the World Championship Series after the grand final in Beijing.

Alistair Brownlee broke away from younger brother to take victory in the final race of the seven-event series, and secure his second world title.

Jonathan says he is happy to take silver overall, after finishing third in China, behind Switzerland's Sven Riederer.