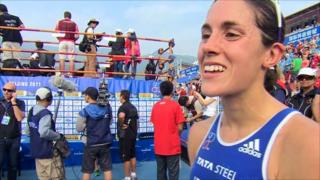 Britain's Helen Jenkins says the final race of the triathlon series was "tough" and exposed athletes' weaknesses, as she took the world title in Beijing.

Her victory comes a day after Alistair Brownlee claimed the men's title.