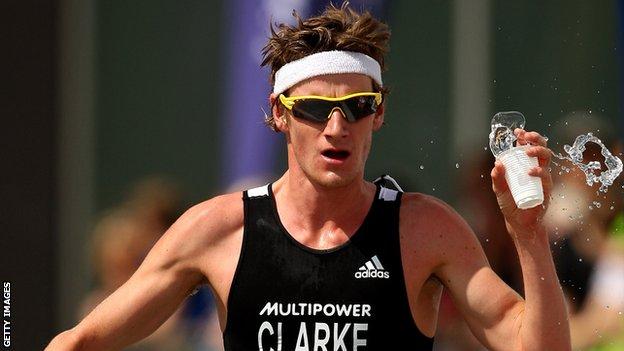 Will Clarke believes he has done enough to persuade Britain's Olympic selectors he is worthy of a triathlon call-up.

Brothers Alistair and Jonathan Brownlee have secured two of the three available spots, with a third to be confirmed in June.

Clarke is likely to be up against Tim Don for the final qualifying place.

"Hopefully I have proved to the selectors that I'm the third best Brit," the 27-year-old from St Neots told BBC Radio Cambridgeshire.

Clarke ended the 2011 World Championship Series ranked ninth after claiming his first podium finish with a second place in Hamburg.

And he started this year's campaign well as the highest British finisher in Sydney, where he took eighth place in an event in which neither of the Brownlees competed.

"It was important to start the year off racing well," he said.

"I had a good year last year with my first ever World Championship Series podium. It's good that I've started the year off in good form."

However, Clarke's Olympics prospects could be affected if the British Triathlon Federation decide to opt for a domestique - an athlete whose main aim would be to assist the Brownlees in finishing among the medals.

He will have to wait until after the selection committee meet on 29 May before finding out his fate.

"It would be nice to know whether or not I'm going. It's kind of stressful and it's not the ideal situation," he said.

"But I can only control trying to get as fit as possible and proving I'm the third best Brit and should go.

"If I qualify for London it will be the biggest race of my career, no matter how many Olympics I go to.

"It will be really cool racing in front of family and friends in my home country."