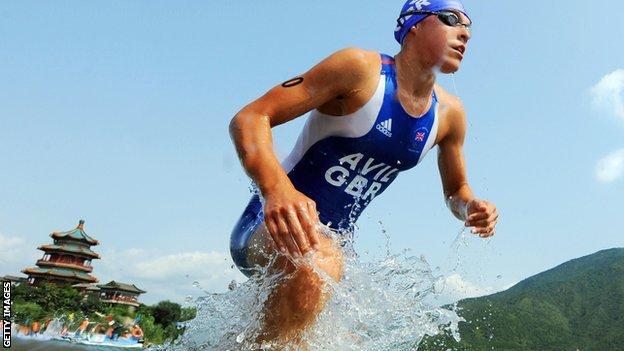 Hollie Avil, who represented Team GB in the triathlon at the Beijing Olympics, has retired from elite sport after battling an eating disorder she says was triggered by a coach's comment.

"My health and happiness was at risk. Life is too short," the former world junior champion told BBC Radio 5 live.

"You start cutting little things out of your diet and it all catches up with you until it possesses your life."

Avil blames an ill-judged remark in 2006 from a coach who was not hers.

In her own words: Hollie Avil writes for the Daily Telegraph

"I said I was looking forward to getting back to my swimming and that it would get me fit. He said, 'Swimming is not going to make you quicker Hollie, if you want to get quicker you should watch your weight'," she explained.

"I became a bit more switched on to it and started looking at other athletes and what they were eating, their shapes and sizes - what they were doing.

"I was living at the home at the time so I was quite sneaky in hiding it from my parents.

"My mum would make me lunches and things and I would throw away half of it and hardly eat. Then I took control of making my own lunch and all I would really eat was salad.

"I remember on one occasion I went shopping with my mum and I was trying on a dress that was quite open at the back.

"Mum just looked at me and started crying. But if she asked me outright if I had any problems with my eating I would just deny it.

"If anyone asked I would just say it was just because I am training hard. You become a liar and really sneaky and I hated being that person as well."

Avil's illness was flagged up by Ben Bright, who coached her at the Beijing Olympics. He discussed the problems with her parents and supported her as she began her recovery with a nutritionist.

He showed Avil statistics that demonstrated that she was running faster when she was heavier, but she admits that the effects of her diet were obvious in other parts of her training.

"When I got light I could barely swim, I had no buoyancy, my times were horrendous," she remembered.

"I was getting cold in the water. Ben told me that in triathlon it is about being strong rather than skinny."

Avil's condition improved and, after winning world and European junior titles in 2007, she was ranked as world number one in 2008 in the wake of top-four finishes in her first three World Cups at senior level.

But after an unrelated illness wrecked her hopes of challenging for medals in Beijing, Avil suffered a recurrence of her eating disorder in the summer of 2010, prompted by the stress of changing training base and coach.

She also suffered stress fractures, which she believes was a consequence of reduced bone density caused by her diet, and suffered another bout of self-reflection with London 2012 looming.

"It was just eating me up inside," she said.

"It was pressure from myself about when I could come back, could I still run, would I be ready for the Games?

"It was building and building up until I just cracked.

Avil's tale is a relative rarity in sport, although Australia flanker David Pocock is among the small number of fellow professionals to have admitted to problems.

"It is definitely a problem that affects even household names," Avil added.

"It is not just from our sport or our nation.

"People are always scared about how they are going to be viewed especially if they are still in the sport and don't want the stigma.

"We make out that we have great lives and that everything is going well, but there is lots going on behind the scenes that we need to deal with."