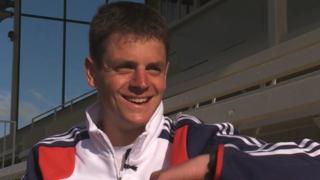 World title would be special - Brownlee

British triathlete Jonny Brownlee says it would be "very, very special" if he is crowned world champion in Auckland in Sunday's final race of the 2012 ITU World Triathlon Series.

The Leeds athlete is favourite to succeed brother Alistair as world champion, with a podium finish in Auckland enough to secure the title.

Brownlee, who won triathlon bronze at London 2012, also says he plans to take two weeks off after the race to travel round New Zealand with his family in a campervan.

There will be live coverage of the men's race from 01:00 BST on Sunday 21 October on the Red Button, and a highlights programme rounding up all the weekend's action in Auckland at 14:05 BST on Sunday afternoon on BBC Two.