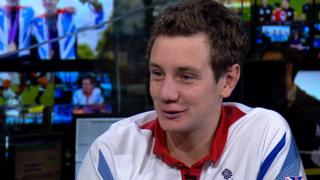 Britain's Olympic triathlon champion Alistair Brownlee tells BBC Sport he would "love" to run a 10,000m in the future.

The 24-year-old from Yorkshire says he wants to challenge himself but Triathlon remains his priority.

Brother Jonathan says competing to win the world series gave him a focus after the Olympics, but that did not compare to winning the bronze medal he got in London.