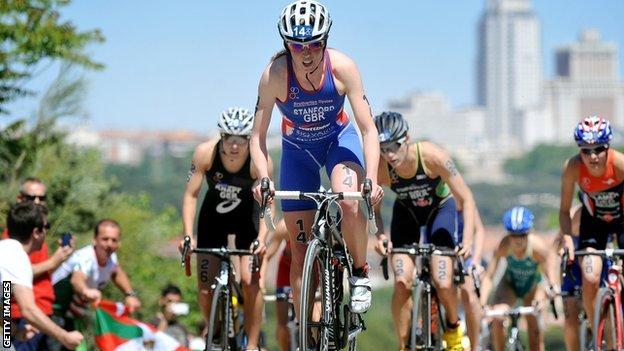 Non Stanford says she is a "very lucky girl" to escape without serious injury from a crash in Sunday's world series mixed relay triathlon in Hamburg.

The 24-year-old from Swansea was in hospital overnight after a heavy fall towards the end of her 6.6km bike leg.

Writing on Twitter on Monday, she said: "Out of hospital this morning relatively unscathed! Very lucky girl."

The British team were leading when Stanford came off her bike, after Jodie Stimpson and Alistair Brownlee had given them a significant advantage.

Jonny Brownlee, who won the individual race on Saturday, had been waiting to complete the anchor leg.

Germany took advantage to win on home soil ahead of New Zealand and the USA.

Stanford was taken to hospital after the crash, but British Triathlon posted on Twitter: "Non is doing ok, thanks for all your concern, we'll pass on your good wishes to her."

She had been attempting to extend Britain's lead when she crashed, following news that the team had been given a 10-second penalty because of Alistair Brownlee's dismount from the bike.