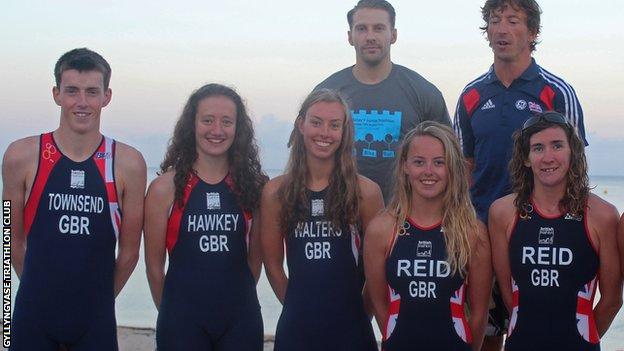 Reid, 22, will be competing in the elite paratriathlon event, while her 16-year-old sister Courtney-Lee will compete in the 16-19 age-group race.

Lowenna Hawkey and Kieran Townsend are also in the 16-19 race, while Rebecca Walters is in the 20-24 age category.

All five are members of the Gyllyngvase Life Saving and Triathlon Club.

The World Championships are being held in Hyde Park in London, with the British team also including Olympic medallists Alistair and Jonathan Brownlee.

Melissa Reid, who is visually impaired, took gold in the British and European Championships earlier this year.

"Melissa has inspired the whole club to aim high and achieve their goals," said chairman and head coach Allan Reid.

"I really believe the recent success of the club is down to the inspiration from Melissa and the support network that the club can provide."