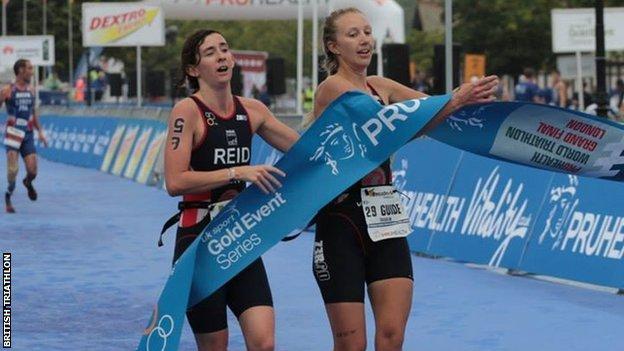 Cornwall paratriathlete Melissa Reid has reflected on an "incredible" year of success after winning two world titles in the space of a week.

Reid, who competes in the Tri-6 category for visually impaired athletes, won the World Aquathlon and the World Paratriathlon Championships.

"It's been an incredible year for me. I couldn't be happier right now."

I couldn't be prouder of Melissa

Reid and her guide Nicole Walters - herself a Great Britain-standard age-group triathlete - beat her main rival Susanna Rodriguez into second place in Hyde Park in front of a large crowd.

"In 2011 I raced in Hyde Park and finished second, it's fantastic to win gold two years later in front of a massive home crowd," said Reid.

'I had a solid swim, and held my lead on the tandem, despite the slippery course.

"We then managed to pull away on the run, setting a PB time. Thanks to everyone for the support, especially those who came along to cheer me on."

The 22-year-old's father and coach Allan Reid added: "I couldn't be prouder of Melissa. Everything we're doing is working towards Rio and it's really good to see Melissa performing so well having only been in the sport for two years.