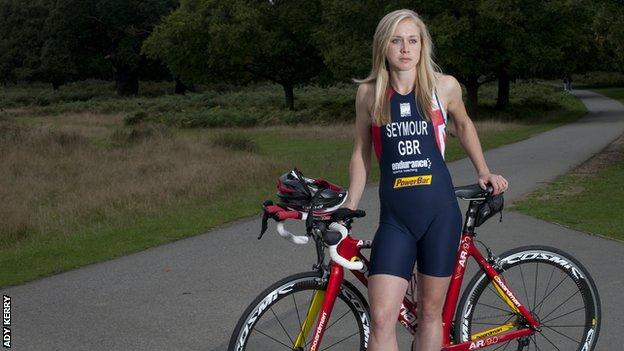 At London 2012, the Great Britain women's hockey team won bronze and 16 of the nation's finest had a medal draped around their necks.

But there was a 17th athlete who lived in the Olympic Village, took part in the team's training, attended all of their matches and did not win a medal.

Natalie Seymour was the team's first reserve and did not play a game.

She announced her retirement this January at just 27, having taken an 18-month break from the sport after the Olympics.

And the former Canterbury player, who won 74 caps for England and Great Britain, has found an excellent way of overcoming what she describes a "difficult" and "confusing" time - by becoming one of the country's leading triathletes.

Her first season as a triathlete began with the British Championships in Liverpool, an event she entered "just to see what I could do" but at which she finished fourth in her age group.

It culminated in a ninth place in the 25-29 age category at the ITU World Triathlon Grand Final in London last September.

"Since I've started, I've really enjoyed it," she told BBC Radio Kent. "The season I had, I thought 'this is something I'm really enjoying' and it confirmed I'd made the right decision."

I could wish things had been different but I look at everything that's happened since. I'm in a great position

Seymour is younger than many of the current international hockey squad but says she has no regrets over giving it up.

"It was a difficult time [at the Olympics] because it wasn't the experience I wanted," she explained. "Confusing or rollercoaster is a really good way to describe it.

"At the time, I didn't really know what to think or feel.

"Prior to the tournament, I already knew the position I was in. I had a really important role for the squad, and it was about trying to focus on that really.

"There's no doubt, if you'd asked me much closer to selection, I'd want to be playing at London 2012.

"I could wish things had been different but I look at everything that's happened since - I'm in a great position, and really enjoying what I'm doing."

Her Olympic experience could have been transformed when captain Kate Walsh broke her jaw in the opening game of the tournament, but the defender was not called on.

"When Kate got her injury, the biggest concern for me was whether she was OK," Seymour said.

"While you'd love to play, there's no part of me that would wish anyone else to have their Olympics ended in such a horrible way.

"When you've trained alongside people for three years, it's hard to feel like that but I was part of it and I gave all I could."

And post-hockey, Seymour has another focus in addition to her blossoming triathlon career - a doctorate in clinical psychology at Royal Holloway, University of London.

It is a career move she had planned even before her unhappy Olympic experience.

"While I was involved in the central hockey programme, we had support from the English Institute of Sport," she said.

"I actually applied for the doctorate during the programme just to practise applying. I was number 60 on a reserve list for this interview and only found out about it two days before. Something was telling me I should go for this while the opportunity was there.

"I had to make a decision about two weeks before the Olympics. I knew that I wanted to take some time out from the sport."

Now, even with a busy schedule of working and studying five days a week, Seymour still manages to train twice a day and in 2014 will compete for the Thames Turbo triathlon team.

"I could see that my career as a psychologist was starting to evolve," she continues.

"After the season I had in triathlon, I evaluated it with my coach and felt it was a great opportunity to see what I could do with this sport.

"It was then I realised I needed to make a clear decision on my mind to focus on triathlon."

And Seymour believes that in part she has her negative Olympic experiences to thank for her success in her new sport.

"It's the freshness I'm really enjoying," she said. "The central programme gave me an opportunity to be the best I can be as a hockey player. Now it's not something I want to do and I'm relishing the new challenge.

"I have to believe that it happened the way it was meant to or you can dwell on it too much.

"I don't think there's unfinished business at an elite level but I certainly think I can succeed to a very high level in triathlon.

"I genuinely enjoy learning and that's why I'm still studying now and why I'm relishing the challenge of a new sport."

If all goes well, that new challenge could lead her to what she was so tantalisingly close to 18 months ago, showcasing her skills on an Olympic stage.