Exhausted Briton Jonny Brownlee needed to be helped over the finish line by brother Alistair in a dramatic end to the Triathlon World Series in Mexico.

Leading with 700m left, Jonny, 26, began to weave over the road in hot and humid conditions in Cozumel.

Third-placed Alistair, 28, caught his brother, propping him up for the final couple of hundred metres before pushing him over the line in second place.

They were overtaken by South African Henri Schoeman, the eventual winner.

Victory in Mexico would have given Jonny the world title, but second place left him just four points behind Mario Mola.

The Spaniard was fifth on Sunday to top the overall standings.

Jonny, Olympic silver medallist at Rio 2016 and a bronze medallist at London 2012, collapsed to the ground the moment he crossed the finish line.

He required treatment but later tweeted he was OK, with a photo of himself lying in a hospital bed on a drip.

Alongside a video clip of the finish of the race, the 2012 world champion also wrote: "Normally when you have had too much to drink. This time it was the opposite #ouch" 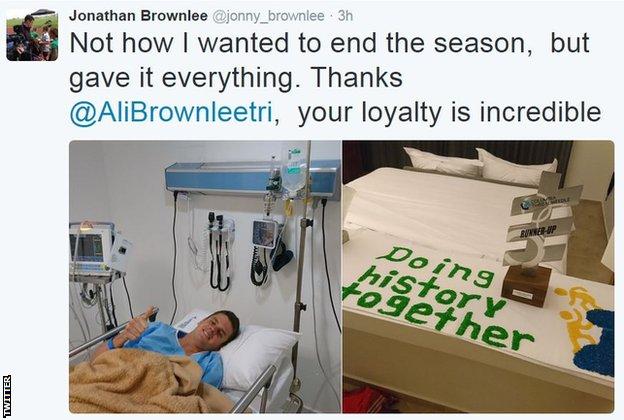 Alistair said it was "a natural human reaction" to come to the aid of his brother, adding: "I'd have done the same thing for anyone in that position."

He added: "I wish the flippin' idiot had paced it right and crossed the finish line first.

"He could have jogged that last two kilometres and won the race.

"You have to race the conditions. I was comfortable in third. I raced the conditions, I took the water on, made myself cool and I was all right."

'This was not how I wanted to win'

"First of all this was not how I wanted to win the world championship," the Spaniard said in an interview on the International Triathlon Union (ITU) website.

"I was already considering that the role of Alistair was to help Jonny. Considering that, I thought, 'I'm going to be second again, but at least I will fight to the end'.

"And when I heard Jonny isn't feeling well, I thought, 'I need to fight to the end'. We want everyone to be safe after the finish line."

Schoeman, who finished fourth in the overall standings, won the race - consisting of a 1.5km swim, 40km cycle and 10km run - in one hour 46 minutes 50 seconds, with both Brownlees 18 seconds behind. Mola was 46 seconds back in fifth.

The ITU dismissed the Spanish Triathlon Federation's appeal to disqualify Jonny, because "athletes can receive help from another athlete".

Watch highlights of the final race on BBC Two and the BBC Sport website at 13:45 BST on Monday.