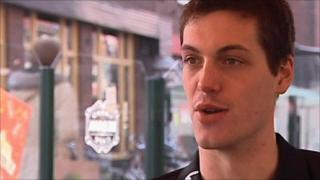 GB Indoor Volleyball captain Ben Pipes is one of 18 GB players living and training abroad in the build up to the 2012 Olympics.

The sport suffered severe funding cuts following a UK Sport shortfall in 2009 and as a result Pipes and his team-mates were forced to look for professional, paid contracts across the continent.

The 24-year-old from Cottingham near Hull, is hoping playing for Langhenkel Volley, in the Netherlands, will give him the top-level experience he needs to make his mark in London - as BBC Look North's Simon Clark reports.