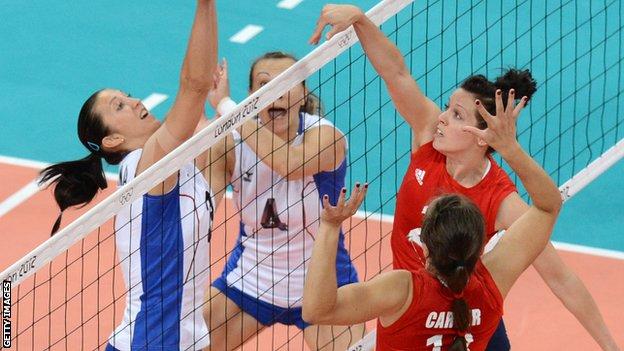 There is now no professional England team, with

The legacy aspect has been disappointing. It was meant to be one of the main goals of London 2012 but we don't even have an England senior team

"I fundamentally disagree with it. Team sports only have one medal available but for individual sports there are a lot more - how can that be fair?"

Volleyball has been included in the Olympic programme for men and women since debuting at Tokyo in 1964. Over thirty years later, at the Atlanta Olympics of 1996, two-person beach volleyball was also introduced.

But last summer's Games was the first time Great Britain had entered a team in either format of the sport.

"I've been so disappointed with the whole legacy aspect because that was meant to be one of the biggest things to come from the Olympics," Wicks, from Dorset, continued.

"Volleyball is still so new in Britain, it's a development sport. Yet worldwide it is the sport with the highest participation levels amongst women, whilst also being widely played by men - we are still playing catch-up."

At London 2012, all four Team GB teams were eliminated in the group stages - Zara Dampney and Shauna Mullin did also play in the 'lucky loser' round for a place in the knockout stage of the beach volleyball but lost to the Austrian pair.

Before the Olympics, each Great Britain team was set a target by UK Sport for having its funding renewed. The volleyball team's target was for one of the indoor teams to win one match, something achieved by the women's side in beating Algeria 3-2.

However, that target came with the caveat "maximum expectation", stipulating one beach volleyball pair must finish in the top 10 and one indoor team in the top eight - both goals they failed to achieve.

"The problem with UK Sport is that they have a no-compromise approach to funding," remarked Wicks.

"People are becoming really excited about volleyball but now there is not going to be a system in place for people to go out and play at the highest level."

In a change in priorities, UK Sport slashed its funding of volleyball post-2012 and instead Sport England - whose remit is to develop grassroots sport - pledged £5.1m towards creating a new generation of players over the next four-year Olympic cycle.

But the lack of opportunities for elite players in Britain has led to the likes of Wicks, Team GB's vice-captain at the London Olympics, playing professionally in Central and Eastern Europe, with the 31-year-old based in Germany at Alemannia Aachen.

At the moment there is no England senior team. What are kids going to aspire towards now? The exposure we were promised is completely gone

The Poole-born player only started playing volleyball in 1998 at the age of 16, and less than a year later she was representing England at youth level.

"Grassroots-wise it's fantastic that people can go out and try volleyball," she added.

"Developing team sports for children especially is really important because the skills you learn are different to just playing individual sport.

"But you can't put all the money in one end of the sport. It shouldn't all go to performance either, but there has to be some put into the elite.

"At the moment there is no England senior team. What are kids going to aspire towards when they're not able to represent their country at the top level?

"Honestly, I hope the new plan works but, as a player, it's so disappointing that the exposure we were promised is completely gone."