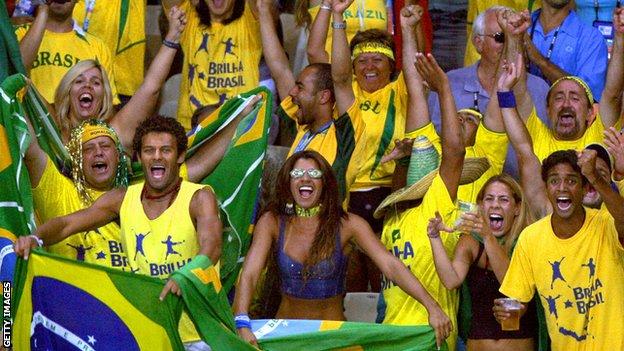 The hottest ticket for the 2016 Olympics in Rio de Janeiro? It has to be one for the men's 100m final, with Usain Bolt chasing a third straight sprint gold, hasn't it?

Or maybe the football, with superstar Neymar leading Brazil's bid for a long-overdue Games success?

Nope. The sport most Brazilians want to see - and by some margin - is volleyball. Doug Gray examines the sport's appeal.

Until the late 1970s, volleyball in Brazil was viewed as a game for females, much derided by the country's macho Latino society.

The big breakthrough came in 1982, when the men beat the then Olympic champions USSR in the final of the Mundialito - the first televised competition in Brazil and a warm-up for the World Championships.

To capitalise on the sport's rising popularity, a friendly was organised a year later, between the men's team and the USSR. The game at the Maracana in Rio - a venue synonymous with football - attracted a crowd of 95,887, which remains the sport's biggest.

Then came the 1984 Olympic Games. Brazil sent a promising young men's squad to Los Angeles and came away with a surprise silver medal. From then on, the sport's popularity sky-rocketed.

The men are now the number one team in the world, while the women will be bidding for a hat-trick of Olympic titles on home soil next year.

A sport for the masses and big business

The following saying exists in Brazil: "Football is religion, volleyball is our number one sport." It's not hard to see why that phrase holds water.

Just over 15m Brazilians regularly play volleyball, while the vast cable network SportTV now broadcasts up to three games a week nationwide, spreading volleyball's popularity to the poorer north of the country.

It's true that volleyball remains the domain of the more affluent south - centred around Sao Paulo, Minas Gerais and Rio Grande do Sul - but Maranhao became the first Superliga (elite division) team from the north-east in 2010.

Volleyball is big business in Brazil, too, epitomised by Banco do Brasil's sponsorship of the Brazilian Volleyball Confederation.

Considered the greatest sporting deal in Brazil's history outside of football, it was signed in 1991 and remains in place today, pumping R$70m (£15.8m, $24.5m) a year into the grassroots training, facilities and coaching programmes.

As for team sponsorship, multi-national companies like Nestle and Unilever's Rexona are notable contributors. The annual cost of running a top Superliga team last season was around R$15m (£3.4m, $5.3m), almost four times the cost in 2010.

Top players are household names in Brazil, while some are among the best paid sportsmen and women in the South American country.

Back in the 1980s, Bernard Rajzman and William Carvalho da Silva were the players everyone knew. Rajzman created the 'Jornada', a serve so high that it broke ceiling lights in lower-roofed courts. Carvalho da Silva was the team's much-loved captain who effortlessly controlled games.

Nowadays, it is the likes of Sheilla Castro, Jaqueline Carvalho who capture the public's imagination.

Castro has two Olympic golds to her name as well as a headline-grabbing celebrity marriage with ex-basketball player Brenno Blassioli. Two-time Olympic champion Carvalho is a highly paid model and one half of Brazilian volleyball's golden couple with husband Murilo Endres.

The pair, who were irreplaceable as Brazil took Olympic gold and two silvers in Athens, Beijing and London, also acquired million-dollar sponsorship deals, fronting marketing campaigns for everything from telecoms companies to English-language schools.

Tickets cost as much as for 100m final

Given the huge interest in volleyball, it's little wonder that tickets to watch the Olympic action are in hot demand.

Within two weeks of registration opening for the first ticket ballot in March, 200,000 Brazilians had applied. Of those, 27% had volleyball as their first choice, with football second with 21.9%, narrowly ahead of swimming.

With a half-finished course surrounded in controversy over the much-delayed construction in the middle of a nature reserve, golf's return to sport's greatest event has attracted the least interest.

Matches will take place at the 12,000-capacity Ginasio do Maracanazinho. It stands side-by-side with the football mecca that is the Maracana, which can house almost 80,000 people after being rebuilt for the 2014 Fifa World Cup.

A national disaster if Brazil miss out on gold

Number one in the rankings, gold narrowly slipped through the men's fingers at London 2012 after they blew a two-set lead over Russia. But they continue to be coached by Bernardo Rocha de Rezende, who guided them to gold at Athens in 2004.

A member of the team that won silver in 1984, his coaching accolades also include eight World Volleyball League titles between 2000 and 2010. His son, Bruno, is also Brazilian captain.

The women's team may not be world number one on paper, but back-to-back Olympic golds under coach José Roberto Guimaraes, who steered the men's team to Olympic gold in 1992, mean that a unique hat-trick is well within their reach next year.

Defeat would be a national disaster akin to last year's catastrophe at the Fifa World Cup, when Brazil were humbled 7-1 in the semi-finals on home soil by eventual winners Germany.

"There's a lot of pressure of course, but it's good pressure," says women's captain Fabiana Claudino. "We want to win on home turf. If the men win, too, can you imagine the party?"