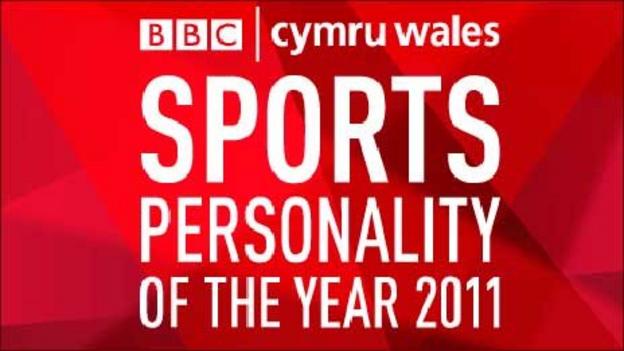 The winner of BBC Cymru Wales Sports Personality of the Year 2011 will be announced on Monday after a contest between five of the country's highest-achieving sportsmen and women.

The award takes place at the Liberty Stadium in Swansea on 12 December, with the result broadcast on BBC Wales radio, online and television that evening - and a review of the sporting year to be screened on Tuesday.

There will also be awards for the team of the year, sports unsung hero, junior sportsman, junior sportswoman and lifetime achievement.

It has been a busy sporting year with some notable performances, making it another difficult decision to narrow down Welsh sport's big names to five deserving nominees.

Athlete Dai Greene won gold at the World Championships in South Korea in September, his achievement crowning a glittering season for the 400 metre hurdler.

Triathlete Helen Jenkins battled through a gruelling season to become world champion and has her eyes set on Olympics glory in 2012.

Paralympian Nathan Stephens started the year on a high, winning gold in his category in the javelin in the World Championships in New Zealand in January before breaking the world record in August.

1. Voting was available by telephone and text message from 0800 GMT on Monday, 5 December 2011 and 1800 GMT on Saturday, 10 December 2011 (both dates inclusive). The numbers used were promoted across BBC Wales output throughout the week.

2. Telephone and text votes were opened and closed as specified above. Votes received outside the specified times will not be counted, but may still be charged. Voting times may change.

3. The BBC reserves the right to cancel or suspend voting at any time.

5. Voters must obtain permission from the bill payer before voting. Voters aged 12 or under should obtain parent/guardian consent before voting.

6. If you are viewing the programme through iPlayer or any other time-shifting or catch-up service you should check carefully whether the vote is open before doing so as it may have closed.

7. Make sure you dial carefully only the number or type carefully the short code / keyword combination of the person you wish to vote for.

8. The BBC reserves the right to disqualify votes if it has reasonable grounds to suspect that fraudulent voting has occurred or if it considers there has been any deliberate attempt to manipulate the result. The BBC can only guarantee that votes individually entered directly through the telephone numbers or short code / keywords promoted by the programme will count.

10. For the purposes of verifying any claim for refunds (where offered) or investigating possible voting irregularities, the BBC may need to request the network operator to disclose the telephone number that you are voting from. Please note that this will still be required where you have originally opted not to disclose your telephone number (caller's line identification barring). If you do not agree to this, you should not vote.

Where such investigations are required, the BBC will only ever use your telephone number for the purposes of processing refunds or investigating possible voting irregularities and will not publish or provide it to anyone without permission, except where required for enforcement of these terms. You can read more about the BBC Privacy Policy here.

12. The BBC, its sub-contractors, subsidiaries and/or agencies cannot accept any responsibility whatsoever for: (i) any technical failure or malfunction or any other problem with any telephone network or line, system, server, provider or otherwise which may result in any vote being lost or not properly registered or recorded; and (ii) any of the nominee withdrawing from the event or refusing to accept the award for any reason.

13. The voting in this programme accords with the BBC's Code of Conduct for Competitions and Voting, details of which can be found on the BBC's Standards and Guidelines website.