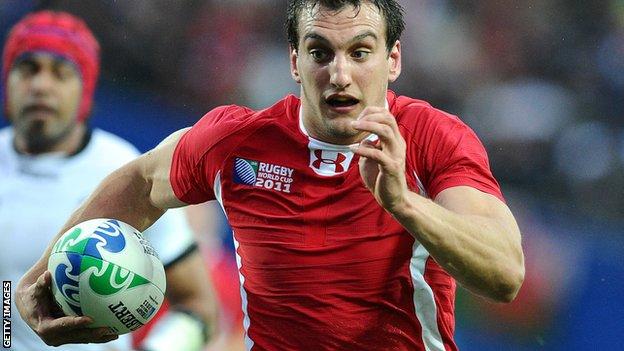 Sam Warburton glides through the unforgiving terrain of international captaincy so comfortably it feels as though this is his umpteenth Six Nations tournament as skipper, rather than his first.

His fresh face already feels familiar as the one Welsh rugby now presents to the world after becoming the emblematic influence of the last World Cup.

We know he was the heartbeat of the Wales squad in New Zealand; that he is famously teetotal; that he went to school with Gareth Bale; that he is a Spurs fan who likes Black Sabbath, playing the drums, walking the dog, the odd curry - sometimes in that order.

But what we don't know - yet - is how he will handle leading Wales into the bi-annual ambush of Dublin and an Ireland team who are grimly set on revenge for Wellington and last October. It may be a fixture rich in history, but Irish players have talked all week about easing the pain of that very last meeting.

This week, Sport Wales sits and talks to Sam the man. Presenter Jason Mohammad meets him at Rhiwbina Rugby Club in Cardiff to discuss Sunday's match, leadership, and everything else that surrounds the oldest rugby tournament in the world.

We sample the throughts and moods from both camps, including hearing from Warren Gatland and Declan Kidney.

A lot has been spoken about the "feelgood factor" which swept through Welsh rugby during the World Cup. It was certainly evident when the Welsh regions won seven of their first eight matches in Europe.

But the same regions then won seven of their next 24, while Wales themselves go to the new Aviva Stadium looking to end a run of three successive defeats in Dublin.

The intrigue in this fixture is that the high water mark for Wales in New Zealand was that quarter-final victory over a much-fancied Ireland.

Sunday represents a re-match and we sample the throughts and moods from both camps, including hearing from Warren Gatland and Declan Kidney.

Away from rugby, we will have all the goals from Swansea City's and Cardiff City's midweek exertions, while reporter Ian Hunt reports from the Liberty Stadium following that dramatic 1-1 Premier League draw with Chelsea.

The Swans continue to win admirers for their style, but we probe the playing squad to discover whether there will be sufficient substance over the run-in to avoid tumbling into the relegation scrap being fought out beneath them.

We also feature para-cyclist Mark Colbourne, from Tredegar, who is bidding for gold at the world track championships in Los Angeles next week.

Like Geraint Thomas, Colbourne is currently off the road and on the indoor track and also reaping the benefits of British Cycling's lavishly equipped technical support and back-up.

Unlike Thomas, however, Colbourne is competing as someone who only two years before fell out of the sky in a paragliding accident.

All that, plus the studio prognosis for the sick and the healthy of the Six Nations from Dr Gwyn Jones.