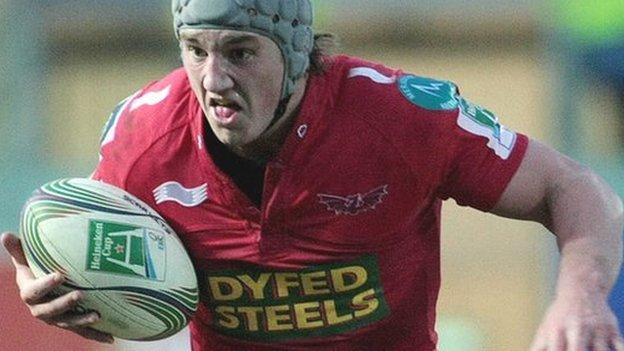 Scarlets head coach Nigel Davies believes Jonathan Davies' decision to remain at the region could help restrict the flow of Welsh stars that are thinking of leaving their regions.

Wales centre Davies, 23, has signed a new two-year deal to stay at the Scarlets until 2014.

The move goes against the current trend of Welsh players heading to play in France or England.

"It sends a strong message from our point of view," said coach Davies.

"It's not to say that in the future we're not going to lose players, because we are, it's a fact of life.

Fundamentally, he's enjoying his rugby with us

"But we have acted in the constraints of our budget. Jon was one of our priorities and we've secured him now."

Davies went on to outline the importance of young Welsh players like centre Davies to the development of the Scarlets over the next few seasons.

"Jon is somebody who's been central to the progress, and represents what we've done over the last three years," he said.

"To hold on to somebody of his quality, and add it to the signings who are already there for the next two to three years, is a significant statement in the current climate."

Davies cited the player's strong ties with the region as a contributing factor to his decision to ignore lucrative offers from abroad and stay with the Welsh region.

"He works around a lot of his close friends, people that he's grown up with, and played through the age grades with," added the coach.

"They're all enjoying their rugby. That's probably the main reason Jon's decided to stay with us.

"It's important that you feel that you are in the right place and that you are part of something special. Otherwise, the lure of money does and can have an effect on individuals.

"Fundamentally, he's enjoying his rugby with us," Davies added.

So far this season Gethin Jenkins, Luke Charteris, Aled Brew and Huw Bennett have all decided to play their rugby in France next term. Still, Davies regards Jonathan Davies' decision to stay in Wales as very significant.

"Overall this is a very, very strong and powerful message both to our fans and to anybody who's thinking of joining us with regards to our ambition."