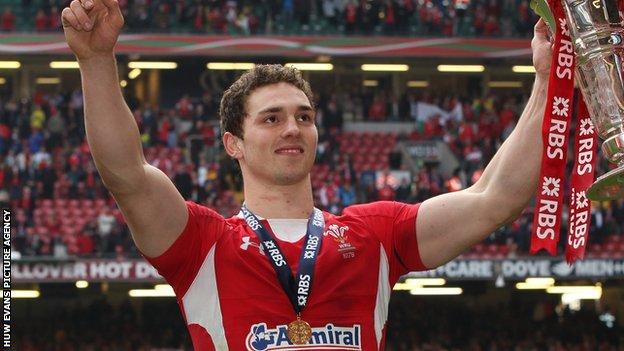 Star wing George North has pledged to stay in Wales for the long term and claims he has had no interest from French clubs.

The 19-year-old, who has two years left on his Scarlets contract, says he wants to stay longer than that.

North helped Wales to the 2012 Six Nations Grand Slam, in the process becoming the youngest player to win 20 international caps.

"I'm very happy down at the Scarlets at the moment," he told BBC Wales.

"I'm getting game time on the pitch and at for my age that's what you want to get a bit more exposure and experience out there.

North, who has 21 Wales caps to his name, said that, unlike other Wales players, such as Gethin Jenkins and Luke Charteris, he had not received offers from clubs in France.

"No not at the moment. It's been quite quiet so it's quite nice really to have a bit less pressure and play rugby really," he revealed.

And North also inisted that he would "probably not" want to leave Wales when his two-year contract is up at the end of the 2013/14 season.

"I'll be 21 then so it's still quite young to be leaving Wales, so hopefully I stay until I'm 30-odd and then if someone wants me then I might go then. But at the moment I'm happy where I am."

North, like a number of his Grand Slam-winning team-mates, is almost a certainty to make the British and Irish Lions tour to Australia in 2013.

And he believes Wales coach Warren Gatland, who gave him his international debut in 2010 after only seven games at senior club level, deserves the job of Lions head coach.

"Gats has done a great job with the Six Nations and the World Cup," said North.

"I'm sure he will be over the moon if he gets the job and I hope he does. He is a great coach and has done well for Wales."