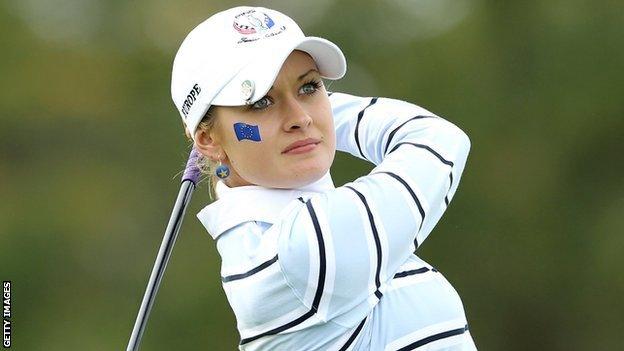 Amy Boulden will make her Curtis Cup debut in June after being selected in the Great Britain and Ireland team.

The 18-year-old from Conwy Golf Club is one of eight players selected for the biennial match against America's finest female amateurs.

Compatriot Tegwen Matthews will captain the side, the first Welsh women to lead the team in its 80-year history.

Welsh Amateur champion Becky Harries is on the reserve list for the match at Nairn Golf Club, Scotland (8-10 June).

"Congratulations are obviously due to Amy whose strong play over the last two seasons demanded a place. It is testament to her ability and hard work, but also all those involved in the Welsh golfing system who have played a part along the way.

"She was unbeaten against the Americans in the Junior Solheim Cup last year, so all of Welsh golf will be behind her hoping she can be part of a victorious Great Britain and Ireland team.

"At the age of 18 there is still plenty of potential for Amy, but it good to see her achieving so much already."

Boulden was part of the GB&I team that beat Australia, Canada, New Zealand and South Africa to win the 2011 Astor Trophy at Fairhaven Gold Club in Lancashire.

A further four players will be making their Curtis Cup debut for GB&I as they aim to beat the USA for the first time since 1996.