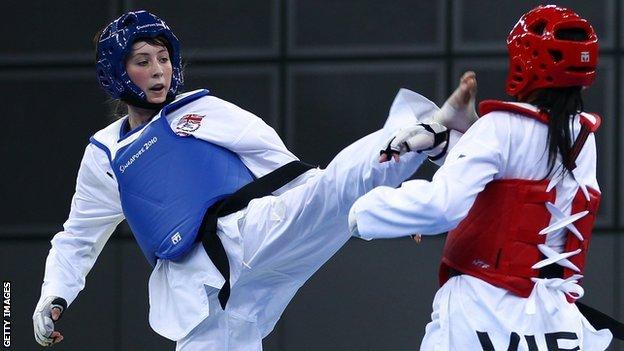 Jade Jones is one of Wales' biggest 2012 Olympic hopefuls with her eyes on taekwondo gold. In this column, the Flint-bred 19-year-old tells of her ambitions for the London Games.

You may wonder what attracted me, a teenager from a small council house in Flint, to a sport that can be translated from Korean into English as "to smash with the fist and smash with the foot".

Well, it's all down to my grandfather, Martin. He took me along to my local taekwondo club because, at 15 years old, I'd become a cheeky teenager and he felt I needed to be kept off the streets - he didn't want me to go down the wrong path in life.

A few years later and here I am, living at the Team GB taekwondo base in Manchester, one of 16 members of the academy hoping to win Olympic gold in London, all living in three houses.

It can be tough at times - I've missed out on the normal teenage years, but this is what I want to do.

Sometimes it's quite hard because you're not a normal teenager - I only get to socialise with the 16 people in the academy and you're all different ages as well and I only see the same people every day.

I try to get home as much as I can and I try to see some friends. After the Olympics I'm going to have a month or two off, but in the meantime, this is what I want to do - it overrides everything.

The pressure's mounting and as more people hear about me, the more they expect me to win.

I've just got to think about it in a different way. All I can do is control what I do - train really hard and go there and try to do the best for myself and hopefully they'll all be chuffed and proud of me.

My town, Flint, is so small, but everyone's behind me. When I needed to go to the 2010 Youth Olympics in Singapore I didn't have enough money.

But everyone got behind me - all the local pubs raising money - they got £1,500 to get me there.

To me that's the most pressure - to succeed for my local backing; it's the pressure you put on yourself from friends and family because you know how proud they'd feel if I win gold.

I could do something special and no-one would be able to take that away from me.

In 20 or 30 years' time, I want to be remembered as having been one of the greats of my sport, having done something big for Great Britain.

I've got a chance to do that because GB has only won one Olympic taekwondo medal (Sarah Stevenson's bronze in 2008).

I started taekwondo in a semi-contact style when I was about eight years old and I've been doing the full-contact since I was 15.

People mostly think taekwondo is just fighting, but the moves are flashy, dynamic and explosive and it's nice to watch as well - you've got to be flexible.

I've knocked a couple of people out in the ring and you clash with people and they've then hurt their knee. You feel bad, but it's not your fault

I just love all the flashy kicks and spins. If you switch off for a second you get knocked out so the adrenalin's pumping.

In school I loved every sport - I was always on the teams and always wanted to be involved. I just couldn't stick to this one seriously at the time.

My friends were always moaning at me for not going out and things, but now they understand.

They think the prospect of me going to the Olympics is bonkers, especially when they see me on the Jonathan Ross show and things like that. They think it's crazy.

Next up for me are the European Championships in Manchester (3-6 May) and all my training now is geared towards that.

Touch wood, I haven't suffered any serious injuries yet. I'm lucky - a lot of people in my house have had quite a few bad injuries.

You've just got to wear as much protection as you can in training.

I've knocked a couple of people out in the ring. You clash with people and that can mean injuries. You feel bad, but it's not your fault - it just happens and you have to forget about it.

In most other sports, you have to be good at a set thing, but in taekwondo there are so many things that will help you win.

But the main things are you have to be strong, aggressive and get in there to fight. Now it's three points for a head-shot, which means flexibility and the will to get a head-shot are important. You have to be determined, too.

I've got a really good chance of being on the podium at the London Games. But in my weight category it's so hard.

You look at other weights and there are only one or two people in serious contention, but in mine there are 11 people with a chance to win gold.

It is going to be really hard, but on my day, I could definitely win.