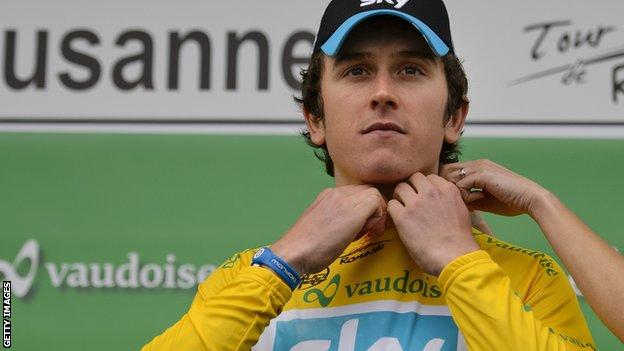 Cyclist Millar will be eligible after the British Olympic Association's policy of lifetime bans was overturned.

The BOA has lost its battle with the World Anti-Doping Agency (Wada) at the Court of Arbitration for Sport (Cas).

"It will improve their [GB's] chances of winning. At the same time I would have liked to have kept the ruling and kept that lifetime ban," said Thomas.

Cas announced its decision at on Monday.

That ruling was great for Britain. It was a real hard stance on doping. It was a good thing. It's sad that that is lost now

It means the likes of sprinter Dwain Chambers, 34, and Millar, 35, can try to qualify for Team GB.

Millar was given a two-year ban in 2004 for after admitting taking the blood-boosting agent EPO, while Chambers tested positive for the designer drug THG a year earlier.

Both have since worked closely with the anti-doping authorities to help them crack down on drug cheats.

"I've got no issue with him [Millar]," Thomas insisted. "I rode the worlds alongside Dave last year and raced week-in, week-out with him.

"It's good for Cav [Mark Cavendish] and the GB road team for sure.

"I've got no issue with him personally. He does a lot of good for the sport, but at the same time that ruling was great for Britain. It was a real hard stance on doping.

"It was a good thing. It's sad that that is lost now.

"It's not our decision - it's for the guys in the suits who have decided the rules."